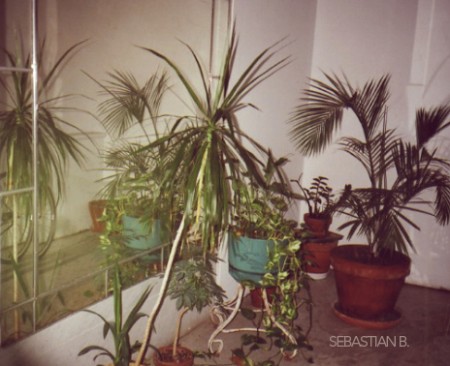 I know very little about Sebastian B. besides the fact that he has a great record collection, when I visited Cincinnati last summer and ran into the super kind guy that was full of knowledge about his vinyl I realized he was pretty old school about things, I don’t even think he has a myspace which is pretty unbelievable to me in 2009 but also a nice change of pace. The tracks he picks in this mix range from 1981 to now, I really adore the ending few songs but one thing I learned about mixes recently from Michna who put out a mixtape on cassette this year is that they’re not made to be skipped around on to find what you want, you just have to trust the DJ that put it together to give you an hour of fresh and enjoyable songs.

DOYOUPKMELANGE? mixed by Sebastian B.

The Orb
A Huge Ever Growing Pulsating Brain That Rules From The Centre Of The Ultraworld: Live Mix MK10 (Big Life/UK) (1991)

Love this! please post more mixes to download if you can find ’em. so good to work to or play when you got peeps coming over and you’re sick of playlists!

Thanks! This is awesome =)

BTW, I have listened to Eliot Lipp – Live from the Beat Bunker about 600 times now =) Amazing set! Thanks for that one too!

Didn’t know you came to Cincy last year. Any plans for future trips?

Jakub this is awesome, I’m only 26 minutes in but I’m loving it.

Hey guys thanks for the kind words — I totally threw this mix together with what was on my floor — it was a little promo for an event at the Contemporary Arts Center in Cincinnati. Definitely very obvious choices here, not the newest burners, but all good songs. Never enough space in an hour, so when are we throwing the Tenaglia length (3-4 day) Mancuso cosmic jambo complete with acid prog and slow trance and Moby and beacho sex trips and CeCe Penniston and hot Japanese and Danish chicks with dope bookbags and all that?

Anyway — keep eyes peeled for more mixes — I have a little site in the works and a bunch of theme mixes i gotta do — from liiiike, you know, Japan boogie and surf stuff to Zanzibar house to yacht to motown to big room over the top SLOOOWW TUUUURRBO stuff to Saturday morning AM radio to Wedding songs to Murk grooves to Omar S to Isolee to Marbo style Progressive and Trance to Brazillian to Stretch & Bob/Red Alert/ColdCut style hip hop mixes et all…

That Ryuichi song is mislabeled I believe, I have a Japan copy (ie in Japanese) and Discogs was misleading — I think it’s actually “Venezia” that’s on there. Is this like the most obvious song in the world? Sorry. It’s a really common record. But peep the beautiful alternate version on the excellent Hatchback mix from Dreamchimney a lil while ago. Holler at ol’ dude about that one, I’m curious myself. LOVE the Hatchback and Windsurf records BTW. White Diamond total best of last year. KILLIN IT GUYS! (Bring SENTRALL back, SANDROS! Where have you gone?). (TOP SECRET BRAILLE —
(“ALEX C e.g. S O C…………” totally need to do that… ))

Also, credit where credit is due, I have to give a little shout to J&J aka Justin Miller & Jacques Renault — rounding out the mix with that Arthur Russell jammy was a lil nod to their excellent mix from earlier this year (fit in much better on that one, I was just being laaazy), not to mention the Runaway track on there — always top notch guys, thanks.

Last but not least I was just in NY for a very brief visit, I’m so overdue to quasi-permanente re-join you all on the geographical tip, but anyway … to the people I managed to cross paths with both intentionally and accidentally— Smallchange, Jemz, Fran & Nick, THE WILDERNESS (Contempo Casual Thursdays are THE BEST), Jessica, Nathalie and Phong, Pete, Leon, James, Kayla, Wade, etc — love you guys.

And to the guys at A1, sorry I dropped sushi on your floor… Freudian something there… my bad…

Dude on WNYC is killin it right now on the free jazz… I’m still in NY state lurking in the dark wild with my fam.

Jakub dude, if the instinct strikes, point West and drive a bit and stop by any time for a michelada on my porch (in NY hit up Hecho en Dumbo ask for Ethan). Otherwise in about a year full on all world meet you there.

I’m not affiliated with this event at all, but if you’re in the Cincy area this weekend (03.21.09) and like what your ears are telling you with this mix, you should make an appearance at this event:

Seb is a wild ball of energy…we must find the source somewhere in the Italdisco stacks at Kim’s.