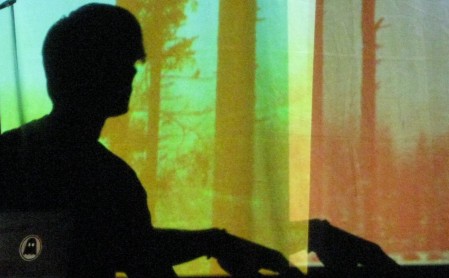 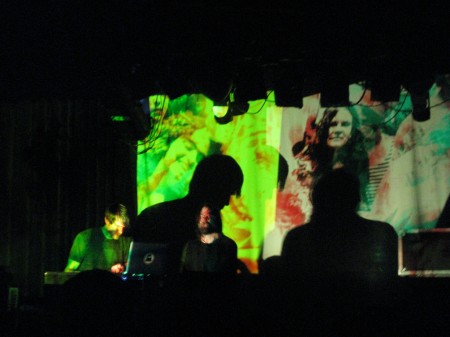 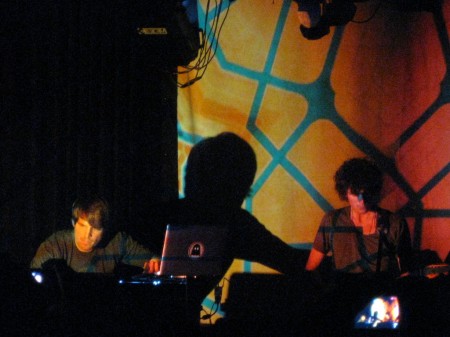 Finally home after an eventful weekend and it’s time to get back to work on the album. I want to thank everyone who made it out to the shows and Ghostly for making it all happen, it was a great time all around. banx_zor got some great shots of the SF show at Mezzanine (posted above). If you have any more of the SF or LA shows let me know! As you can see in photo 2 above, Dusty Brown made a rather animated cameo during the set, thanks to him for tearing it up on the keys. Our very own Alex Cornell also turned in a great performance on a couple guitar tracks (3rd picture down). For those who were wondering, the last 2 tracks I played in each set were new songs, the final one being a single due out shortly on Ghostly International. I’ll keep you posted.

Hi Scott… Just posted some more pics from the show on Flickr:

Now get back to that new album!

Awesome… wish I could of heard the new songs early. I can not wait for the new album! Possible summer release date so it can be my soundtrack for another blistering hot 4 months?

It was great meeting you and Jacub. All in all, that was a great show. People went crazy for you man! (I was hoping that drum set would have been used for your set Scott! woulda had a pretty nice sound- but maybe I’ve been to too many Album Leaf shows). Totally dig the new songs. a little ticked I couldn’t make it through to the Lipp set, ESPECIALLY after you guys posted that recent mix he did. come on 3:15am? Oh and why no personality on stage or on the mic? The show felt a little impersonal for a 10 year celebration.

Lipp sure was hard to stay up for..but it was well worth it…there were probably about 10-15 people left at that point, so you weren’t alone.

Dusty Brown made it to the SF show?? dang it! i knew i should have made the trip up there. the LA show was awesome! i keep checking your sites for the new songs so thanks for the heads up. the friend i brought liked the new song(s) the best. i took about 12 video clips of the concert if you are interested in seeing them. great job on a successful show. very inspiring!

I put the pics up from the show in LA the other day. They’re on my site here: http://justinsucara.com/stuff/ghostly_pics.zip

Thanks for an awesome show, man. Hope to see you play here again soon.

Wow! great show all around. Tycho seemed to be the biggest draw of the night. I am a new fan of Kate Simko and Lusine. I thought they were great. I too am disappointed at not making to Eliott Lipp. I topped out at about 3a. It was great to be able to meet both Scott and Jakub.