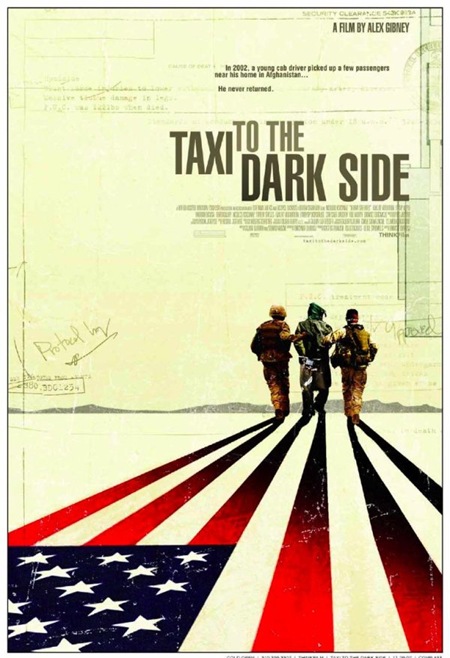 This was posted over at Monoscope:

"The Motion Picture Association of America (MPAA) has rejected Taxi On the Dark Side’s poster as being “not suitable for all audiences.” …
What’s offensive about this image? The detainee in the hood. Well, actually just the hood. An MPAA spokesman said: “We treat all films the same. Ads will be seen by all audiences, including children. If the advertising is not suitable for all audiences it will not be approved by the advertising administration.”
Welcome to the new age of censorship kids, it makes McCarthyism seem almost quaint."

Sickening to say the least. This is a well executed, poignant design and I don’t see how depicting a real world situation in this manner would be offensive to kids.  More like "educational", but of course the MPAA isn’t exactly concerned with educating the youth, perhaps dumbing them down to the point of complete complacency, but certainly not educating.

Check out The Progressive for more examples of attacks on our rights.

What a shame. This is a lovely poster. The type could probably do with being tidied up a bit but the illustration is spot on. There seems to be more and more instances of blatant censorship every day in the UK and USA in recent times. The unfortunate thing is that most of the population seem to have been dumbed down so much already that they don’t even notice, or care when they do.

Paddy-
I have to agree with you on the type… it’s sort of haphazardly laid out. Looks like a case of design by committee, I can hear it now “we want it to look unique, distinctive”… instead it just looks like they forgot what a grid was.

That’s ridiculous – the only people who know he’s wearing a full hood over his head are people educated on military POW procedures (adults), and as such, would not be offended or shocked by the content. Children probably won’t give it a second look, he could be wearing a “hoodie” for all they know.

Maybe I’m not really getting it but, this poster is banned for showing reality ?
That is .. typical.

picking up from where john left off, i must say i’m consistently shocked at the level of grotesquerie and violence in horror movies these days that are aimed straight at youth. also, i’m not so sure about kids not knowing what’s going on in that image…they are surprisingly sophisticated in today’s media soaked culture.

Maybe the poster has a bit of unnecesary noise around… but other than that, it’s a really good one…

Not suitable for kids???… Maybe it’s just best for them to watch CNN and see other kids blown up, amputated and starving…

This is a very very cool poster! It reminds me of some of the imagery on old book covers I would find in my Dad’s shelves…

The age of censorship for children is upon us, and it is, as Scott puts it, sickening…possibly even harmful to the childrens’ natural development. Suppressing free thought and perspective is dangerous, and nitpicking at every minute detail in media is crossing the line.

The RIAA, FCC the MPAA and countless other tasteless beaurocratic institutions, with their filthy yet oh-so-morally-clean hands on art and expression……makes you wonder what it will be like in the future.

For more on the MPAA’s facist censorship ways I recommend the documentary This Film Not Yet Rated; the film is a very interesting watch.

Another case of great ideas shot down by Idiocracy.

Kinda reminds me of the great Lester Beal and his work with the ‘Rural Electrification System’. Nice.

MPAA was created independently by Hollywood not the government. This is so much better than having the government tell you what can’t be shown. And while I think I’d be fine with my kids seeing this image, not every image or film is meant to be shown to all audiences.

Regardless of whether or not kids should look at this, I wish dudes would quit hating on the type. Its my favorite part, nicely balanced and would lend itself well to motion, i.e. After Effects intro. I like it when people brake the grid.

The world is losing its soul.

Has anyone followed up on this bit of censorship? I’ve actually been seeing this poster around – then again I live in Portland, OR. Was it just approved for metropolitan neighborhoods in Blue states or what?

Regardless, the poster is quite fetching. Who knows, maybe the MPAA thing was just a publicity stunt. It got us thinking about the film, didn’t it? Though I have yet to see it, I can imagine that from a film with its purported nature an anti-establishment theme would be a good marketing angle.