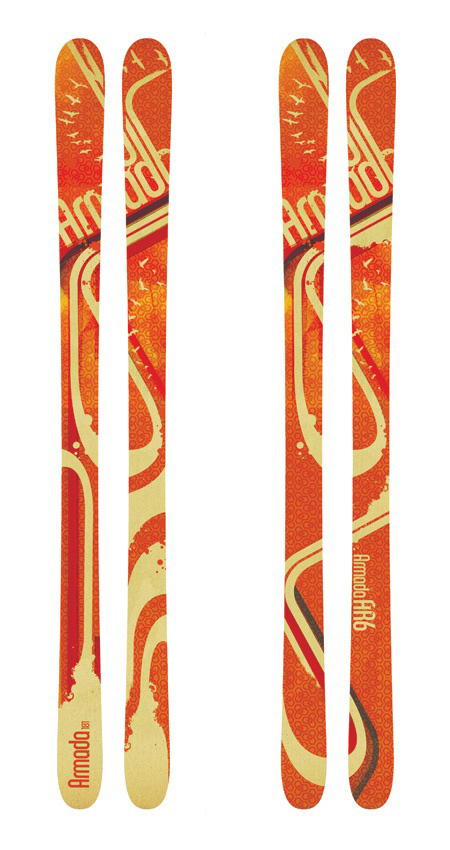 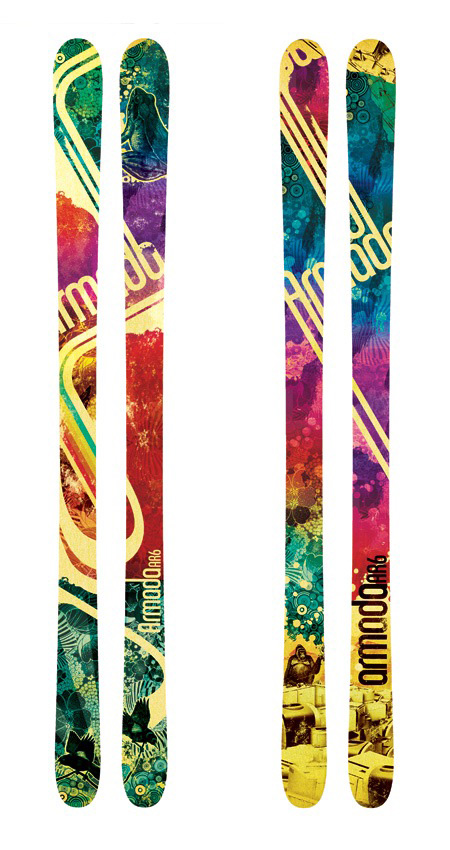 With all this talk of snowboards and all the new snow up in Tahoe, I thought it would be a good time to post about these Armada skis I did a couple years back that have just recently been released. In November of 2006, Armada asked me to design the 2009 AR6 line (there is a relatively long period that separates the design phase and end product in the production cycles of most snowboard / ski manufacturers). Based on the timeline and budget, we decided I’d deliver 2 reference designs which would be extrapolated by in-house designers to fill the 5 versions of the AR6 line. I believe Mackel Vaugn put together the final designs based on what I turned in. The top image (orange, very top) shows the early tests I showed Armada to illustrate what I was going for. Skis are an interesting form factor to design for; you have these two narrow canvases and you sort of have to choose whether to treat them as a whole or individually. Based on the very wide design of the AR6’s I decided to try and tie the two skis together to feel more like one large design across a canvas.

After some meetings with Armada about the tests I had sent in, we decided to stick with the basic forms for the final versions but bring up the overall color and variation of the designs. The results were the final two reference designs (directly above), I delivered the PSD files along with various image collateral and they worked those into final five ski designs. I’ve done a couple ski projects and all my snowboard projects this way. It’s an interesting process, handing off the design and later being surprised by what they end up looking like (the bottoms were a surprise too, only designed the tops). The whole thing reminds me of layer tennis, sort of like a design remix. You can see all the final versions of the AR6 at Armada’s site and you can see some in action in this video review. These are out now, you can check Armada’s dealer list if you want to pick up a pair. I did the 2010 AR6 line as well so you should start seeing those out next fall. Here’s Armada’s product video for the 2009 AR6:

Certainly worth the wait!

They look fantastic, you must ecstatic with the outcome!

I just love them! I have’nt found a nice ski design since the swedish brand extreme realesed one with old school pinups on a wodden core i the late 90s. Thanx scott these are a certain buy for me!

Nice designs bro, I like the colouring of the ski’s in the first image. I see you’ve used much of your existing material to design these. Must have been a little unerving to let someone else finalize your design. That production cycle is insane.

I can’t believe the wait to get them out. 2–3 years? that just seems crazy… They look amazing… I think the original design is the strongest, but ski & board companies seem to not gravitate towards monochromatic design. They need as many colors thrown in as possible, whether it strengthens the design or not.

I’d love to sport them down the mountain any day of the week… until I saw the bottoms that is (heavy sarcasm). I mean they could have done a dozen different things but it looks like they didn’t even try with the bottom. Turn the image black and white and slap on their crummy logo? WTF? Nonetheless the skis look years ahead of most ski and board design. Very Nice. I bet it’ll be a nice feeling the first time you’re on the slopes and you see a pair in action.

those are both so badass…loving the snow right now up in Tahoe as you said Scott, and I wish I had the scrill to ride these moes right now!

What font was used for the text?

marc-
I guess there’s a lot involved in the production and then the marketing materials and all that, it all takes a while to get rolling.

Wow, the original ones are for me, much better. but on the snow they certainly look great! It must be really hard to design some, I’ve checked some other skis design and there are a lot of interesting things, I thougt i’d share my favourite one

I think i’m going to try to design one, just for the fun
Keep up the good work!

Worth mentioning that Armada ski’s are actually the very top of the line quality ski’s, with more and more followers all over the world. I was about to buy ski’s extremely similar to these, also Armada, but in the end went for another brand that was slightly better for the wallet.

Congrats on delivering such a great design, and having your name tied to such an excellent product :)

Awesome designs. I own the original AR5’s (180 cm) and I love them for park riding and random noodling. Other wise they’re crap for holding an edge at high speeds. Armada has come a LONG ways since their conception in what… 2003? But I suppose having Tanner and Auclair and a few other big name pros on their side is a huge help for them.

I’m just glad you didn’t go the route that Head went with this year. I think it’s the Head JJ model with a babe for a graphic. And as much as I love women… it’s a terrible design. I wonder if Jon Olsson had a say in that final design. I know Burton is doing a Playboy line this year and to me… while interesting for a second… is really just blah.

How did you get hooked up with designing for Armada? Did they come to you? Maybe someday you’ll design some skis for Volkl!

NAVIS: Jon did indeed had a say in it, the girl is in fact Norwegian just like he is

Hannes: sry for the bezzerwisserness but Jon is swedish.

Ahhh yes you’re right… then so is the girl on the ski’s :D Norwegian, Swedish…. I was close !