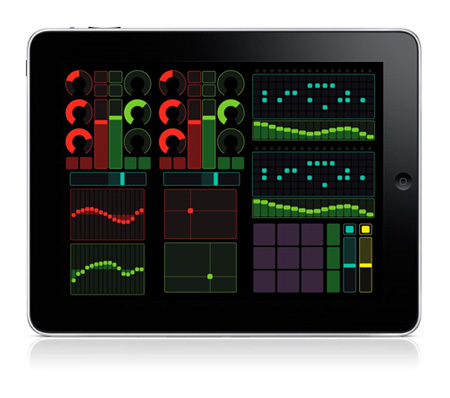 Oh now that is funny. I was just talking to a few friends today about this exact thing!

I use TouchOSC on my iPhone with Ableton Live, Reason and Traktor. I love using it, but having a big screen would be great. But the Lemur is quite cost-prohibitive.

Now, along comes Apple with something that could do the same and more for a quarter the price!

I wasn’t too sure about the iPad until I started thinking about this. Could be very cool.

Actually, you could just use the pixel-doubled iPhone version of TouchOSC and make your own layout, according to Apple, it’s already compatible.

Seems to me that Jazzmutant might have just lost their market.

I was just thinking this same thing earlier today. After reading Create Digital Music’s post about iPad, I’ve been feeling pretty bitter about the iPad not having an actual OS.

There obviously are an incredible amount of capabilities for this here, not only as a controller, but as a standalone instrument (ie. beatmaker, rjdj). Realistically, there will be some incredible music software developments that spawn out of this. Like i said, I’m just still bitter about the fact that putting OS X on a tablet would enable SO MUCH MORE.

And if they were really that certain about using the iphone OS, they could have atleast added a USB port.

Regardless, I guess i’m still really excited to see what softwares do arise out of this, AND how expensive they will be. If the app’s are all still in the $0.99-$20.00 range, then $500.00 for an iPad would be so worth it once those badass music apps start rolling in.

I’d probably buy one anyway, but yes, I would definitely use it as a customisable multi-touch controller.

Yeah, I’ve wanted to run my VJ sets with a Lemur for about 2 years but could never muster the cash. Might end up picking up the low-end iPad if someone comes up with some decent software.

I just tweeted almost exactly the same thought before reading your post Scott. Uncanny. But it is the obvious question..

I have some great music apps on my iPhone already so the iPad can only bring bigger things!

Well this adds a new dimension and charisma to the this strange macbook/iphone toylike breed apple spawned. Thanks for this point of view, just the technical big multi-touch screen :)

Seems plenty of people are already using TouchOSC with Live already, so I’m looking forward to see what people come up with to run on a bigger screen and faster processor.

most definatelly would.
and now that i think of it the ipad could work well as a dj tool, instead of bringin out my laptop all the time (which is getting old and needs to be replaced..)

two years ago i moved to the numark idj2. an ipad as a minimalist dj platform; i like it.

Kinda of subject, but if the iPad can double as a Cintiq I wouldn’t think twice about getting one.

They have one with 3G as well…so would the latency issue be a problem?

I wouldn’t trust a wireless device in a performance setting. If it had an extension for an Ethernet port or we could have osc via usb then I might be inclined to say that this conglomeration of expensive electronic modules might actually be useful and not just supply for a demand that has to be created yet.

I would do it, but only after those intrepid pioneers went out and made it simpler. I seems too ad hoc right now. But one thing is certain, if it can mix better than Serato , then a lot of DJs would rather dump the money into an iPad than into another Serato box. The limit will be memory. If you can’t plug a thumb drive into it, then you can only use the music that is stored on the iPad itself. That would be inconvenient. Plus, it would be a bit fragile and not something I would want to allow the other DJs I play with to use. But let’s say I can network it into a macbook that is already plugged into the mixer, then it’s possible that I could use it to control the set from the booth that I am sitting at eating my complimentary meal. That could be fun.

I think a lot of people that have wanted a lemur, but couldn’t justify $2k will be getting the ipad. Maybe lemur will even port the software over? I’m looking forward to see the music software that comes out for ipad.

i’d love to use it a a simple drum pad live, and of course as a synth app controller.

once the new sdk filters thru to the new versions of mellotron / analog / drum machine emulations… we’ll probably have some interesting “virtual life-sized” instruments for performance. sounds like a fun development.

Regarding the wireless issue, I always bring an airport express with me to create a private sole purpose network for vj-ing. Works great. We even had a laptop analyzing audio from one end of the venue and transmit it to the balcony where the visuals were created.
I do think an iPad would work great. But I must say it doesn’t actually look cool when someone’s holding it and prods it with some fingers (at the keynote). ;)

Who says you have to use Wifi? The iPad has Bluetooth and a Dock Connector. Either of those should be low latency enough for it to work. I think it’s a great idea!

From the information we have, it seems that Apple really dropped the ball by not making this thing OSX driven. It’s a huge iPhone. OK, so we can watch movies on it and they’re bigger. Facebook fills up more of our vision. Pictures are bigger. Cool. For everyone that has a MacBook and/or an iPhone, this really doesn’t bring anything new to the table.

A DAW ‘app’ or TouchOSC ‘app’ of some sort might be fun, but how much good would it do without access to your hard drive, audio files, interface(s), and softsynths that are part of your usual work flow? As a multi-media electronic musician and performer I can say, right now, that this product does not interest me at all.

Then again (and I’m sure some of you have seen this excellent bit of internet archaeology) similar things were said about the iPod: http://forums.macrumors.com/showthread.php?t=500

Hey Scott (long time no see!)
I think the iPad is still not ready to be used as control surfaces for this kind of thing, OSC definitely has been more advanced when it comes to VJing than for audio (iPhone wise) while it might not be as simple to set up, the Lemur controllers are just more robust to be taken on the road, they are heavy and strong, etc. If the iPad ends up being what I expect it to be (and I like to call it an “iPad mini™” it would be hard to imagine it on tour.

Then there is the latency issue, if you want to trigger loops (audio or visual) on the iPhone/ OSC you need to do it a bit earlier than what you want it to trigger. Not the case with the Lemur, if you have used one already, they are very responsive and you can tap it nearly as hard as you would tap on a good ol’ MPC!

Check out my buddy Bryant, he is currently designing a lot of the interfaces you see people using on the Lemurs, very nice work!
http://future-tense-cpu.com/

Hope all is well!

Funny think, becouse I was thinking exactly the same thing when I heard about it. 500$ Lemur! If only somebody start making apple to usb adapter..

I hear some of you wishing/ranting that it doesn’t run full OSX. It won’t. It shouldn’t – it’s a new paradigm. Think on what they did with the iWork suite: real apps for doing real work, re-imagined for multitouch.

@ConnectedLocus: It doesn’t need an HD to do what you say. Could a lemur-like UI control something like Live, MAX or VDMX? Absolutely! It can be a *control surface*, not the entire engine itself. I hope that happens. It’s where things need to head anyway – I can’t stand these dense, confusing interfaces. I need simple and expressive, but powerful; this new class of interfaces will do this.

@Allan White: You made some really good points about this being a new paradigm. I saw those mock ups of the device with OSX on it and got all excited. Time will tell…

“Now if there were just a Photoshop to OSC plugin, you could be running a custom interface via touchscreen.”

There is, sort of. Look for the “TouchOSC Editor” @ http://hexler.net/software/touchosc

Jazz Mutant had the Lemur software running on iPhone at AES two years ago, I would assume an iPad port would be trivial.

“Jazz Mutant had the Lemur software running on iPhone at AES two years ago, I would assume an iPad port would be trivial.”

Jazz Mutant had the Lemur software running on iPhone at AES two years ago, I would assume an iPad port would be trivial.

Never heard this, either. Prooflink?

You sure it wasn’t TouchOSC? That’s been around a while.

I don’t know about the iPad, but custom interfaces like this combined with tactile touchscreens will run shit: http://www.technologyreview.com/computing/22550/?a=f
Who doesn’t want to feel what they’re touching?

Has anyone used Hobnox? http://www.hobnox.com/index.1056.en.html…. think an iPad version of this would be pretty cool.