Archive for the vertex Tag 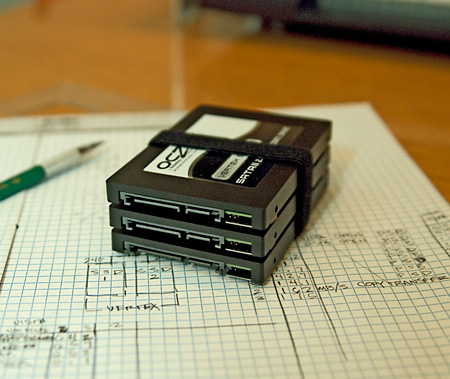 After last month’s foray into the wonderful world of SSD’s via my newly super-powered Macbook Pro, I decided it was time to take my main tower PC to the next level. It wasn’t an easy decision at first, but it soon became a lot easier when two of the four drives in my RAID0 Photoshop swap array went down (for more on RAID, see my earlier post on the subject). I also had a very large format project beginning the next day and was dreading slogging through it with plain old HDDs. So I had two choices:

1. Go the (much) cheaper route — around $300 — and replace the drives in the array with two new ones of the same, ye olden tymes HDD variety.

I’ve made the mistake in the past of skimping and then regretting it later and I am finally starting to learn my lesson on that one. After all, computers are the central element in my professional life and how I make my living. With that in mind it’s easier to justify the large expenditure, as long as the performance gain is substantial enough. And was it ever. I’ve fallen for performance gimmicks and hype here and there in the past and have been disappointed time and again. This wasn’t one of those times.

When I built this particular machine I decided to go big with the processor and got what was at the time a the state-of-the-art Intel Q9650 Core 2 Duo Extreme. I didn’t really skimp on the rest of the components either, it’s definitely a solid rig. Still, I always felt it wasn’t living up to it’s full potential, especially considering the coin I dropped on it originally. Lately, when things are moving slow or just not acting right, I’ve caught myself considering building a new machine. Considering how recently I built the thing and how much it cost, this is just ridiculous. This was supposed to last me a while and be — to a certain degree — future-proof (which, in the computer world, means about 3-4 years). So it sort of came down to spending the $2500 to build a new tower or spending $1200 to make the existing one faster. In light of my experiences with the SSD and my Macbook Pro, I came to the conclusion that the best course of action was to replace the old HDD’s with SSD’s.

I ended up settling on a three drive configuration: One dedicated drive for the OS (Windows 7 RTM 7600 — which has been working out amazingly well) and two drives for the RAID0 array. The Windows drive is clocking in at around 245MB/s (over six times as fast as the average I/O on my old HDD) with a .1ms seek time (which is off the charts fast). The RAID array with just two drives is running around 480MB/s which is significantly faster than the four HDDs I had in there before.

All the numbers are great but there’s a lot more to the story than just raw I/O performance. The drives have removed the one big bottleneck that was left in my system, allowing all of the other components to reach their full potential. The performance increases I’ve seen go far beyond what you might expect from just a faster disk drive. It’s like a whole new computing experience, I feel more able to experiment and a lot more confident about overall stability. I almost feel like the computer used to choke on big data read/writes and would just finally crash. With the new drives it just rips through anything and never really hits that tipping point where things lock up. This new found stability could also be due to the fact that I installed the final RTM version of Windows 7 when I put in the new drives. I had been using the beta, which although very stable in it’s own right, didn’t quite compare to what I am experiencing now.

The bottom line is that SSDs are the real deal. Yes, they’re still expensive, but if you work with computers and very large files, you owe it to yourself and your workflow to look into what they have to offer. If your rig is feeling sluggish, getting a SSD to perk it up might actually turn out be a bargain when compared to the price of a new machine. Of course, a more pragmatic person might wait another year or so until the numbers come down, but I didn’t really have that luxury this time around. I’ll be posting the detailed data next week once I get a chance to do some more tests. The next step is to split that Windows drive and install OS X. If only they made Sonar for Mac I’d make the switch. 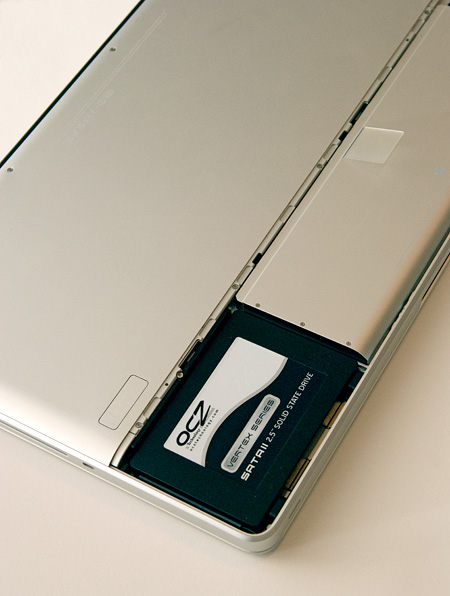 After all my recent hyping of SSD’s (Solid State Drives) I thought it was time to jump in and try one out first hand so I went downtown to Central Computers this afternoon and got an OCZ Vertex 120. I decided to post up my initial reactions and findings after dropping the Vertex into a Macbook Pro Unibody and installing OS X today. If you’re not really a technical person, still have a quick read through the numbers at the bottom because if you use a computer for anything creative (or for anything at all actually) and are looking to significantly boost performance, SSDs should be on your radar. If you have no clue what an SSD is, here’s a brief primer from an earlier post.

After a lot of research on the various SSD manufacturers I came to the conclusion that OCZ’s drives have the best performance/quality-to-dollar ratio. I went with their Vertex 120 drive not only because it’s very fast, but also because it uses the Indilinx Barefoot controller. The concept of an SSD controller may seem a bit esoteric, but it’s very important at this relatively early stage in the development of SSD technology. Inherent to all SSD drives is a tendency to build up “garbage” which can slow performance over time (if you want to know more about SSD “garbage”, read this). The Indilinx controller has a built in mechanism to deal with this garbage and keep the drive running at optimal speeds. The garbage collection runs while the drive is idle and is completely transparent to the OS or user. This capability makes the OCZ Vertex and other drives that run the Indilinx firmware arguably the most advanced SSD’s available at this time. Only firmware 1.30 and up supports this feature but luckily the Indilinx controller supports updates. The drive I bought came with firmware 1.10 but I was able to flash it to the latest 1.30 with relatively little hassle. Apparently all new Vertex drives are shipping with 1.30 stock; mine must have been a couple months old. Here’s the method I used to update the firmware: Bootable Free-DOS for Mac ISO w/ 1.30 FW update.

While the Vertex 120 is not by any means cheap ($389 for 120GB), it is much less expensive than many comparable drives from other manufacturers. It’s the first I’ve seen that offers this kind of performance for anywhere near this price. Of course, 120GB isn’t a lot of room, so you’re going to sacrifice storage space for the speed unless you want to put up the $720 for a 250GB model. I’m not too concerned with that as I’m using the Vertex for my MacBook Pro and I don’t store most of my media and large files on there. I typically use it for live shows where I just need very high read speeds and about 20GB of space. If you’re using a desktop computer, you could alternatively keep your large standard drive and use an SSD as the OS drive. 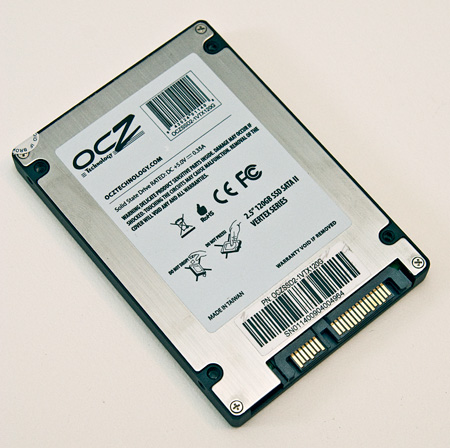 So I opened up the MacBook Pro and swapped out the old drive for the new SSD. This was very easy on the new unibody MBP and only took a few minutes. I then did a fresh install of OS X and booted up. Even after all the hype about SSD performance I was still amazed by the marked improvement in overall system performance I experienced. I could go into the minutiae of interacting with OS X running on the SSD, but suffices to say it is incredibly quick and surprisingly enjoyable.

So, on to the numbers: I did some really basic measurements to gauge the basic performance of the new drive and compared them to the original drive that came with the MBP. First I timed how long it took from power on to login screen. I chose this method so that the amount of startup items and installed apps on either particular machine wouldn’t effect the time.

The boot time for the SSD was nearly triple the speed of the standard drive. But this doesn’t tell the whole story, boot times are dependent on a lot more than raw hard drive speed so even though the difference is impressive, it’s still not telling of how fast this drive really is. For that we need hard numbers. I used the free Xbench to measure the drive speeds and give a better picture of the wide chasm that separates these two drives.

As you can see, the SSD destroyed the standard drive in every conceivable way. The speeds I am seeing are nearly comparable to my RAID0 system which has 3 drives and a highpoint controller and cost me over double the amount I paid for the Vertex SSD. Throw in the fact that the Vertex uses hardly any power (great for notebook battery life) and has no moving parts to break down and you’re looking at a bargain. If you’re looking for a way to speed your rig up I highly advise looking into getting a SSD. Just keep in mind that SSD is a very nascent technology in the grand scheme of computing. If you don’t really need a drive now I would hold off a little and wait for the industry to develop. Prices have been falling very steeply while performance and disk space has steadily increased. If there’s one thing that consumer computer technology has taught us it’s that this trend will most definitely continue until SSD drives become the norm.

If anybody currently has an SSD let us all know your experiences in the comments.