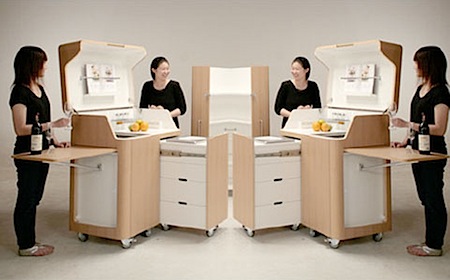 This video for Toshihiko Suzuki’s Kenchikukagu first struck me as sort of funny just for the fact that it’s highly reminiscent of those “Kitchen of The Future” type ads from the 50’s showcasing a bunch of “innovations” most of which were either highly impractical or just downright ridiculous. But after watching it, I want the whole set. Suzuki’s folding rooms are just that, rooms that fold up when not in use. They’re quite well designed and actually seem very practical for the space-challenged and/or OCD level organizers among us. I don’t think I would go as far as to outfit my entire home with these but one or two for choice tasks would be nice. The best part of the whole deal is that these aren’t just concepts, you can actually buy them from Amazon Japan. The worst part? They’ll run you around $7,500 each.

Haha! At the end, it looks like she’s stepping into the box just before closing it.