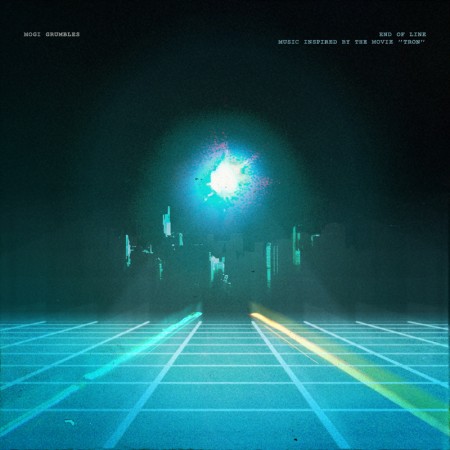 Here it is, Mogi Grumbles’ album which is a tribute soundtrack to the original Tron movie, below is some info about Mogi and the project which is a 60 minute recut of the movie with the album synced to it. The score/album is all done by Mogi Grumbles, please go and download.

“End of Line is an original re-score of the movie Tron (1981), created by Ann Arbor native French / Disco House antihero Mogi Grumbles. End of Line is a 100% independent composition that lives wholly outside the original film score by Wendy Carlos and Annemarie Franklin.

The result of a live collaboration between Alex Taam and video editor Christian Silbereis, a re-cut of the film featuring the Mogi Grumbles re-score has been released as a companion piece for your viewing pleasure.”

Ah, great, really excited for this. Listened to snippets of some of the individual tracks already, sounds really promising. It’ll be great to compare with both the original and the score for the new film.

stunning album artwork. off the grid!

It had been a while since I visited web site with such high potential information. Thansk rather a lot for the useful info. I found your blog on google and read a some of your other posts. I just added you to my Google News Reader. Keep up the good work Look send to reading more from you in the future.

Bought this and loving it!

Thank you for sharing this! Will be donate/downloading asap.

Next time I want to watch Tron and eat pizza I might just go for this version. A+

This is blowing my mind. I can’t stop listening to this set and the re-score video is so rad!

This is AWESOME. In fact, it’s better than the Daft Punk soundtrack in that it’s more song-oriented.

So cool. Better than the new Daft Punk Legacy score.