Archive for the ISO50 Tag 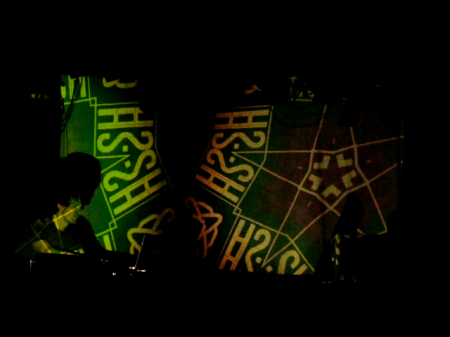 Thanks to everyone for coming out and supporting last night in SF, it was an incredible vibe and I had a great time playing. We drove down to LA today just in time to see Michna’s show @ Turntable Lab. Tomorrow I’ll be playing the L.A. installment of the Ghostly Anniversary show at Jimmy’s Lounge. It’s a daytime show (doors @ 2pm) and I should be going on around 7pm inside (remember to set your clocks forward for daylight savings!). Here’s the lineup with tentative set times (right now I only have times for a few of us ) 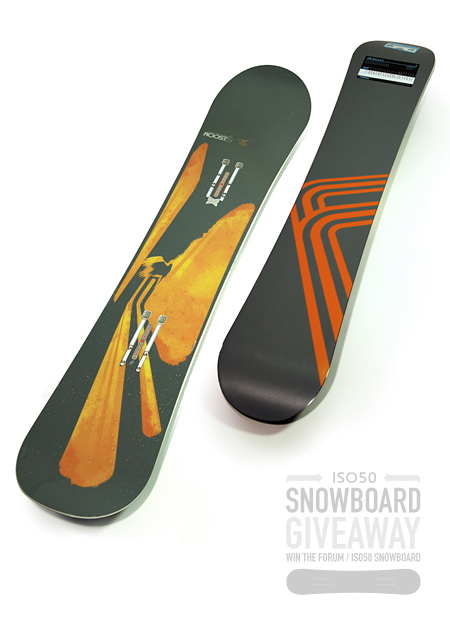 The ISO50 Snowboard Giveaway officially ended yesterday and a winner has been picked. So, without further adieu, the big winner is…
Neil Loehlein of Portland, OR. Neil will be receiving the ISO50 / Forum Devun Walsh board which he can hopefully put to good use up on Mt. Hood. I’ve decided to do a second runner-up drawing for some shirts and posters so I’ll be notifying those winners shortly. Thanks to everyone who participated, next year I am planning on doing another snowboard and/or ski giveaway so keep an eye out for that. 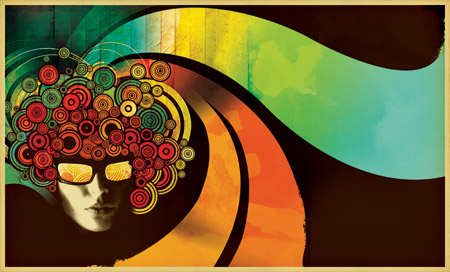 A while back Computer Arts magazine asked me to write an illustration tutorial for an issue which focused on textures. The idea was to revisit the classic Bob Dylan Blowin’ In The Wind / Mister Tambourine Man poster. I really enjoyed the project and ended up using the resulting image as the basis for my Progress Austin concert poster. Computer Arts has made the entire article available on their site as a PDF which you can download here. They’ve even made the original source files available so you can follow along with the tutorial. If you have any questions feel free to post in the comments and I’ll try and fill in any blanks.

Here’s an excerpt from the introduction:

“Creating eye-catching imagery for print can be a balancing act between the two distinct worlds of computer-based design. Scott Hansen shows you how to get explosive results in Photoshop…

The strengths and weaknesses of vector and raster graphics have long been apparent: vector is known for its clean lines and resolution-independent scalability whereas raster has a more photographic nature. Although vector graphics are particularly suited to print work thanks to their scalability, there are some things you can’t do without bringing rasters into the picture.

In this tutorial we show you how to bring together both vector and raster elements to create a seamless piece that sits well in both worlds. The concepts we explore will lend a timeless, weathered feel to what would otherwise be a rather stark design. Relying on Photoshop’s powerful raster tools and quite adequate stable of vector tools, we can tap the strengths of both without leaving the familiar realm of Adobe’s most powerful graphics app. We can unite two styles of design by employing Photoshop’s powerful blending mode options along with advanced gradient masking techniques to produce an illustration style that is truly unique.” 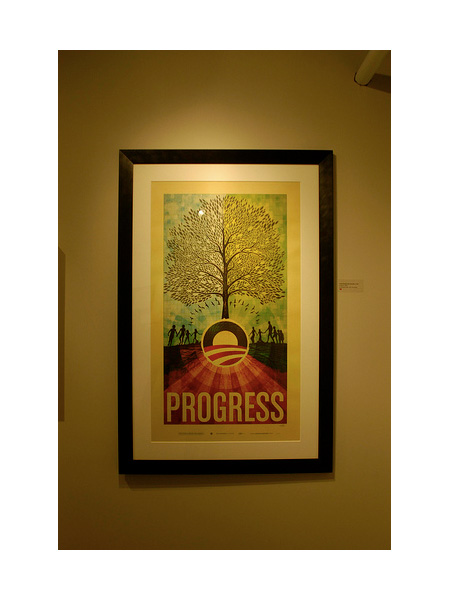 Apparently the Manifest Hope DC show was a big success with a great turnout. Theodor3 posted the pic above on flickr and Piecemaker has some up as well. Unfortunately, I don’t have any personal shots of the print as I didn’t get a chance to grab any before the framed version went out. The print sold so maybe the purchaser or someone else with shots from the show could send a full size head on of it. Notcot also has a lot of great shots from the show here and here. Thanks to everyone who came out and supported, wish I could have been there to see it for myself! 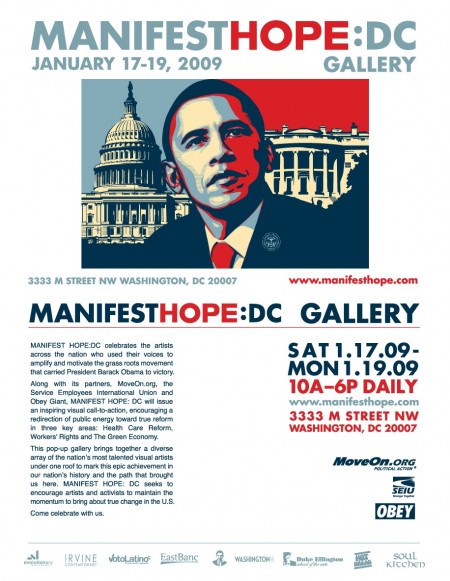 My “Progress” print will be featured in the upcoming Manifest Hope:DC Gallery as part of the lead up to the inauguration ceremony on Tuesday. The gallery runs Saturday, Jan. 17 through Monday, Jan. 19 in DC. I had #112 of the original 200 I signed at press framed and shipped it out last week. Unfortunately, I won’t be able to attend, hopefully somebody can check it out and let me know how it went. Here’s the details:

The MANIFESTHOPE: DC Gallery will be open to the public in Washington, DC for the days preceding the Presidential Inauguration, Saturday, January 17th, 2009 through Monday, January 19th, 2009 between the hours of 10:00 AM – 6:00 PM. Art exhibition management will be provided by our Washington, DC gallery partner, Irvine Contemporary.