Archive for the epoch Tag 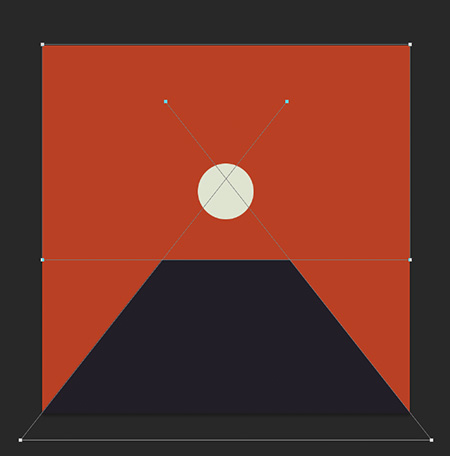 The Epoch is a hinge. We tend to follow a linear trajectory until a point at which we realize that through free will the path can be bent and redirected.

I’ve been very busy for the past year or so working on a new album so it’s been a while since I’ve posted. Now that the new Tycho album — Epoch — is out I wanted to write a little about the meaning and origin of the artwork. I worked as a graphic designer for 14 years until I decided to pursue music full time so the visual element of Tycho has always been at the core of the project for me. I think the imagery tells a story that the music can’t fully articulate, and vice versa.

The sun disc, both literally and as an icon, has always been at the center of the artwork. From Sunrise Projector and on I’ve used the sun and circle as a metaphor for life; the sun being the life giver and the circle symbolizing the closed loop, the interconnectedness of the human experience with the physical world. 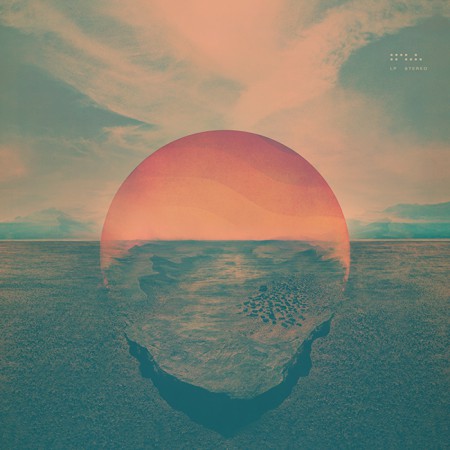 While I had explored a lot of these themes previously, I feel that Dive was the beginning of a trilogy of albums and so was the starting point for a narrative and symbology which have become central to the Tycho identity.

The cover for Dive was a foray into maximalism combining photography and design. I wanted to evoke the sense of being on an unavoidable path, one from which deviation was impossible. I wanted the viewer to be pulled into the image and be drawn toward the sun. I think this design speaks to the music in that it felt like the beginning of a journey and the multi-layered composition echoed the sonic aesthetic of the music. I spent quite a bit of the next couple years refining this style and creating various collage type images. 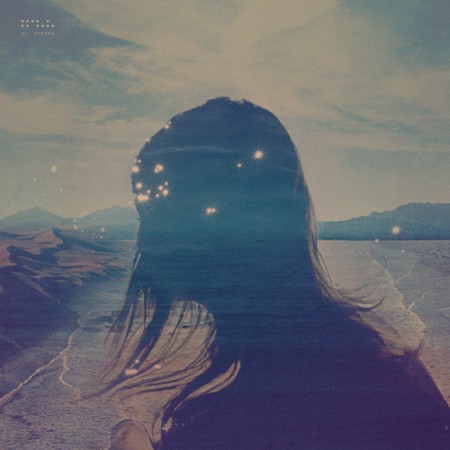 ·  Enter Minimalism and The Trapezoid 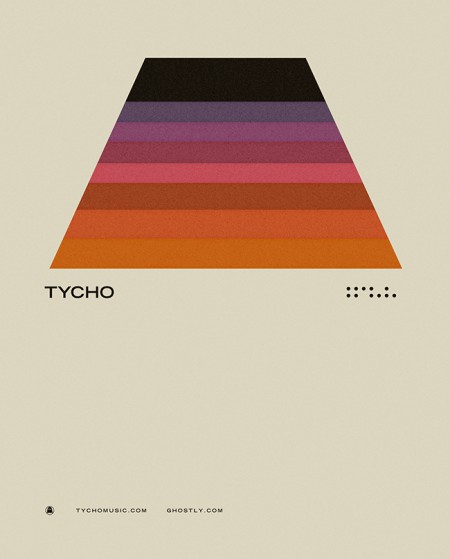 As a graphic designer I have always had a deep appreciation for minimalism and the simplified, efficient expression of ideas through form and color. But as a visual artist working within the context of Tycho my output had typically trended toward almost painterly styles, multilayered collages which were anything but minimal. But at some point after the release of Dive I decided that I wanted to get back to my design roots and bring a more simplified, refined style to the project. The beginning of this shift was around 2012 when we played The Independent in San Francisco. This was meant to be a simplification of the same path seen on the cover of Dive, the colors a reflection of the sun into that path. This was also one of my first uses of the trapezoid shape which would become core to the symbology of Tycho. 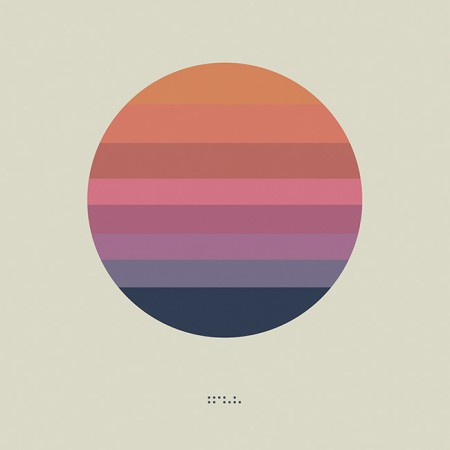 Dive was in many ways a breakthrough record for Tycho: it was when I first formed the live band and we began touring extensively. It also marked the period when I was finally able to quit doing freelance design and focus solely on the music and the imagery surrounding Tycho. After a couple years of touring it came time to make a new album and I knew this would be a pivotal release, quite literally a make-or-break record. I wrestled with the art direction for months before finally deciding to go in an entirely new direction from Dive and earlier works and create a minimalist direction for the release. I had always felt strongly about the spectrum and trapezoid from the 2012 poster and so I revisited the concept and incorporated the sun imagery to bring it into storyline. 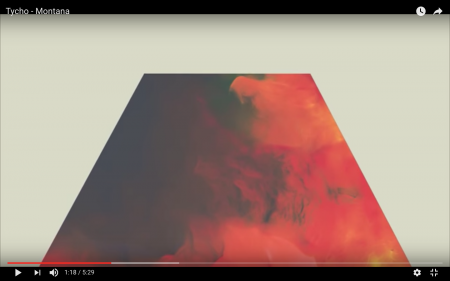 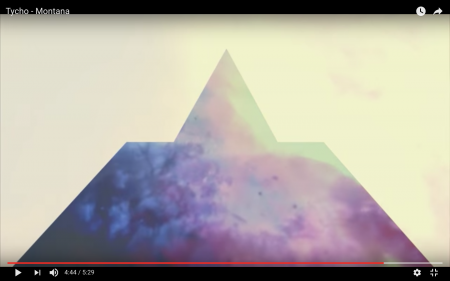 During the Awake album cycle I continued down this path and lots of imagery followed for show posters and releases. 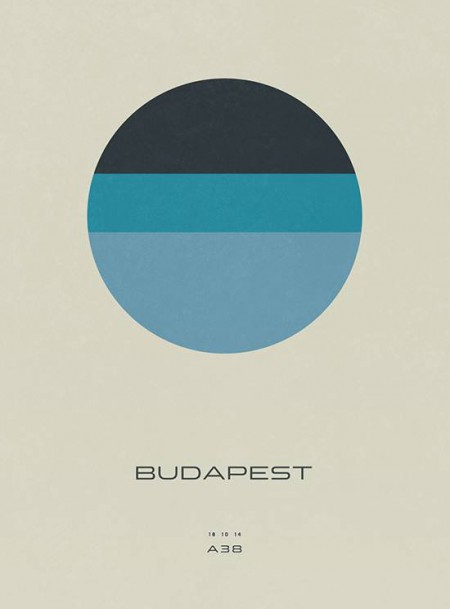 Montana Single (2014) – the trapezoid combined with the triangle

The overall direction for Awake was very light and halfway through the cycle I started shifting things into a darker space for contrast and to foreshadow the next album. 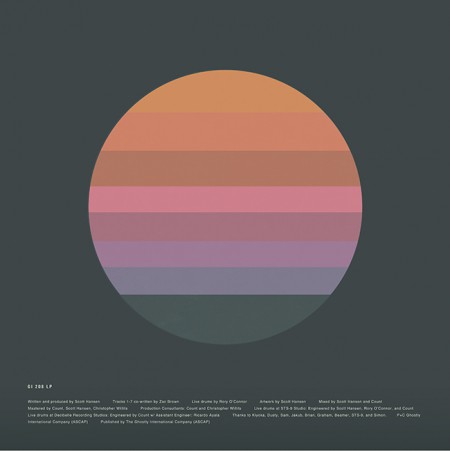 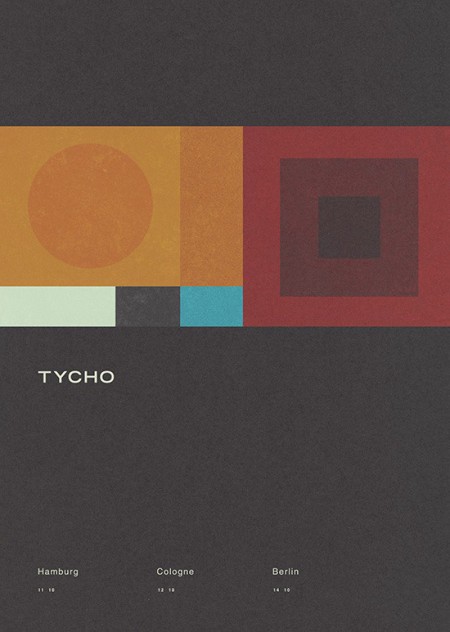 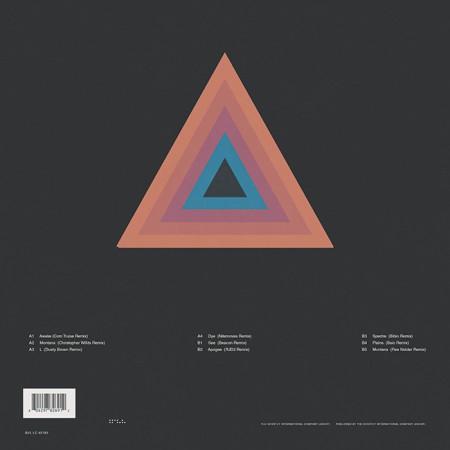 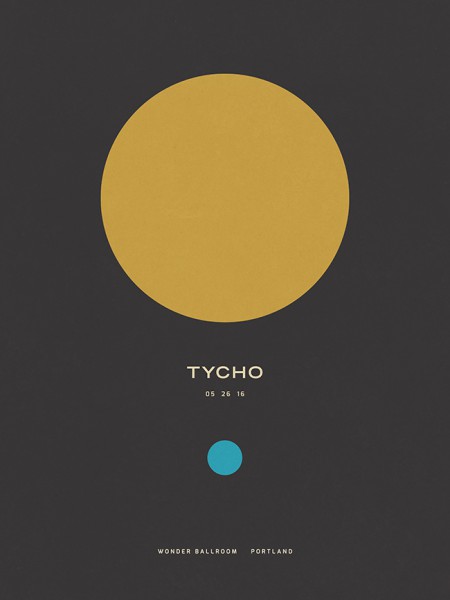 To compliment the darker themes for the Spectre and See singles I introduced the moon as the central element in place of the sun. 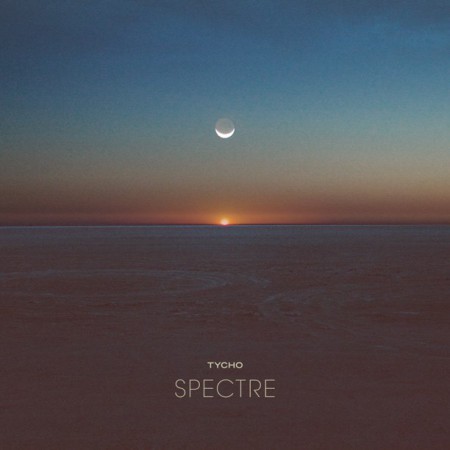 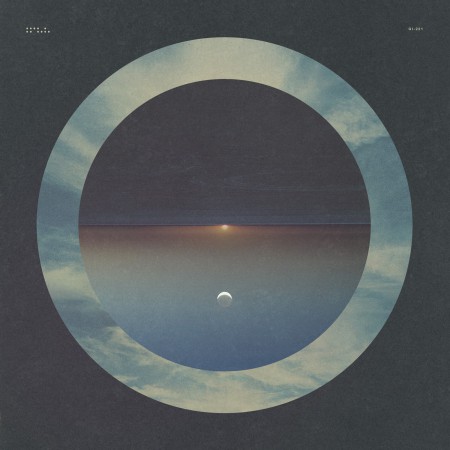 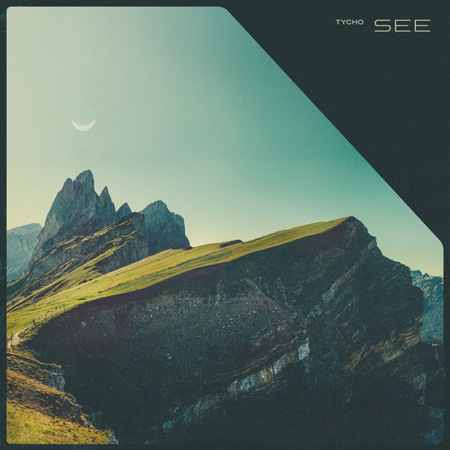 Awake had been out for over two years and it was time to start thinking about the next release. Up until this point, when doing minimal compositions I had been using textures and distressing to give some depth to the images and break up solid fields of color. For the next phase I wanted to further simplify and remove any extraneous elements. I wanted to cut to the core of the message and try to distill things into a language of basic symbols. 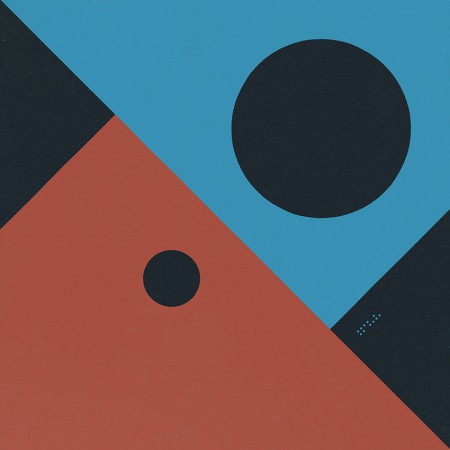 Artwork for the first single from Epoch: Division (2016). This was designed after the album artwork and was meant as a transition which would introduce the elements and colors that would follow in the full length release.

Musically, this album was about circling back while maintaining forward motion; revisiting and refining the concepts of earlier albums with a view to the future. My primary goal was to incorporate the color scheme of the very first Tycho release: The Science of Patterns EP (2002). I also wanted to revisit the simplicity of that artwork as Epoch was all about focus and efficiency, chiseling away anything which was not absolutely necessary. 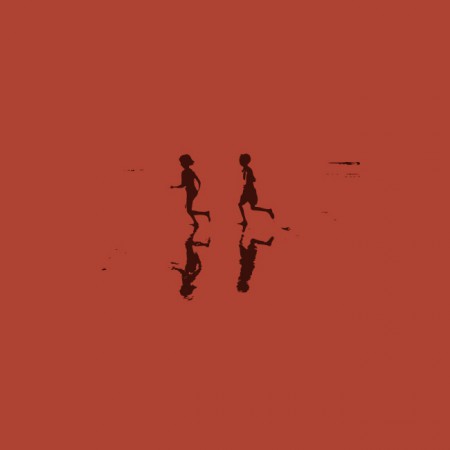 I also wanted to draw upon the two core symbols of the project: the circle and the trapezoid. But this time I wanted the circle to represent the moon, a body reflecting the light of the sun. In this way it was a metaphor for this album, a reflection of the previous works presented in a new form.

The following are selected iterations of the Epoch cover design which led to the final version. 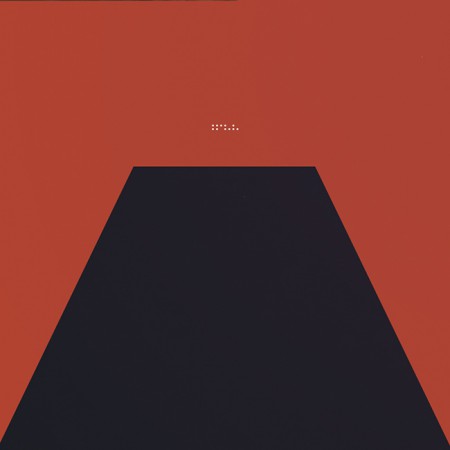 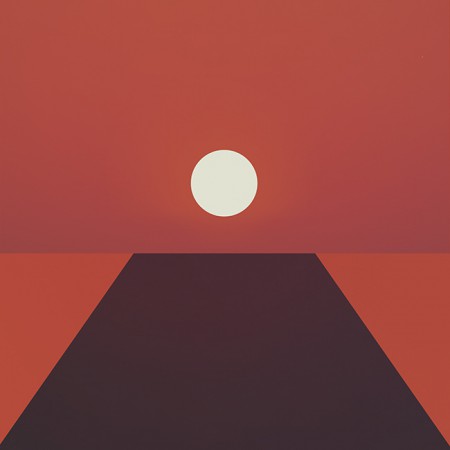 An early concept incorporating a more three dimensional look. I ended up leaving this in favor of a more simplified form 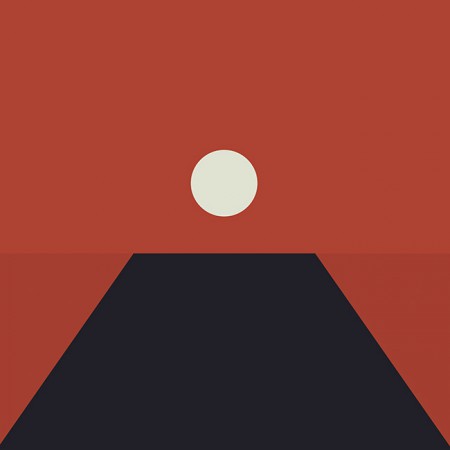 The first simplification, the horizon line is still subtly implied 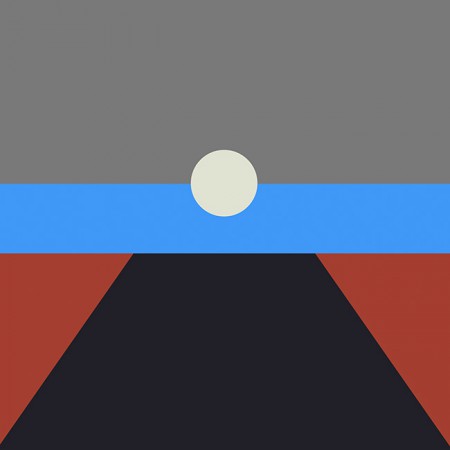 A tangental concept exploring the incorporation of more color. This ended up being the impetus for creating the alternate cover series for the countdown (discussed later) 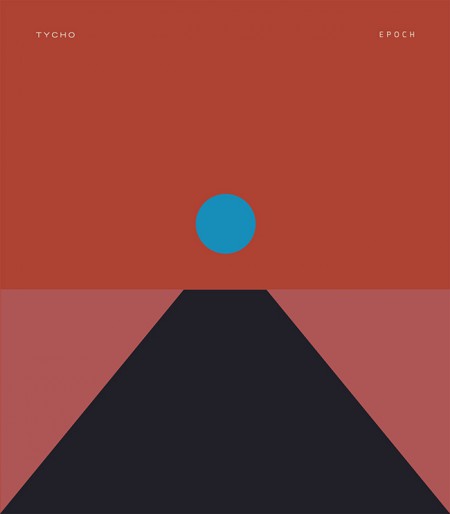 Another alternate with more color and a defined horizon line 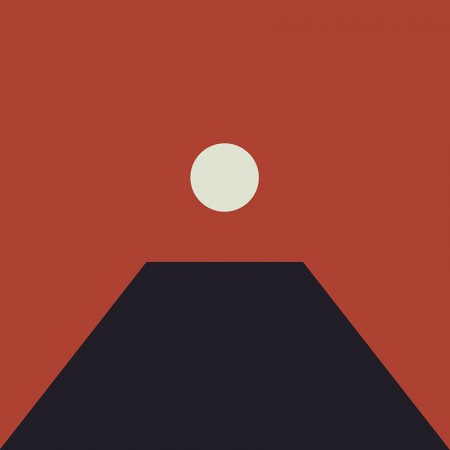 In the end I decided to keep the image ambiguous, the viewer should decide exactly what it was they were looking at and ascribe their own meaning to it. This meant stripping the image down to the essential elements, leaving a simple icon.

I felt that the power of this image would be in its simplicity and also in its portability. It could adapt to many form factors with ease and felt more like a modular system than a singular image. At this point you have to take into account that the vast majority of people will experience album artwork at a tiny square on a smartphone. At this scale a lot of nuance and detail will be lost. This is not to say that I intended to oversimplify purely for this reason, but it is a consideration.

Epoch was released 30 days after completion as a surprise, as such there wasn’t enough time to have vinyl and CDs produced; only digital versions were available on release day. As a stopgap until the vinyl arrived, we decided to offer a custom slipmat with pre-order purchase at retail outlets. More about the release strategy in The New York Times piece With Vinyl, the Musician Tycho Establishes a Physical Presence 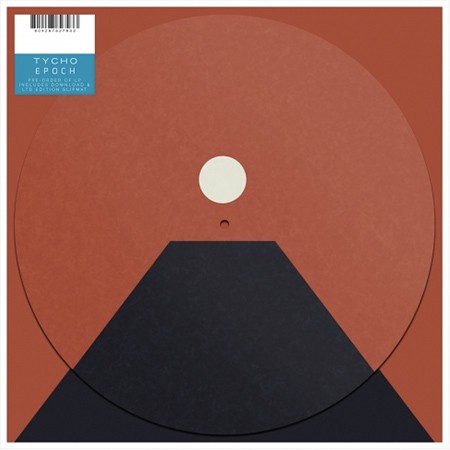 For the Awake release I cut up a print of the cover art into squares and released it as nine panels as a way to count down to the release. For Epoch I wanted to create several alternate versions of the cover art to use for build up. This release was not announced ahead of time so it was fun to slowly release elements of the design without people fully understanding what was coming. Here are a few examples of the alternate versions. 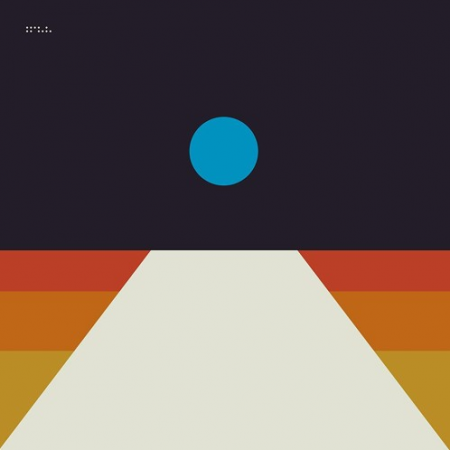 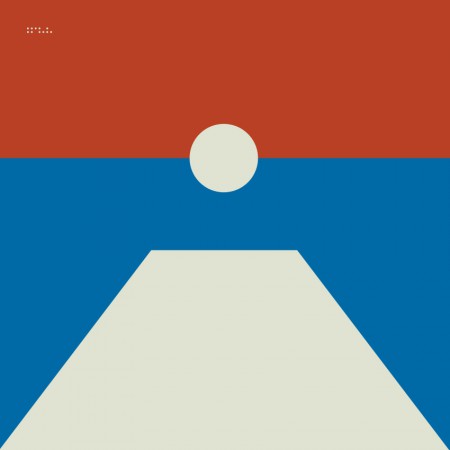 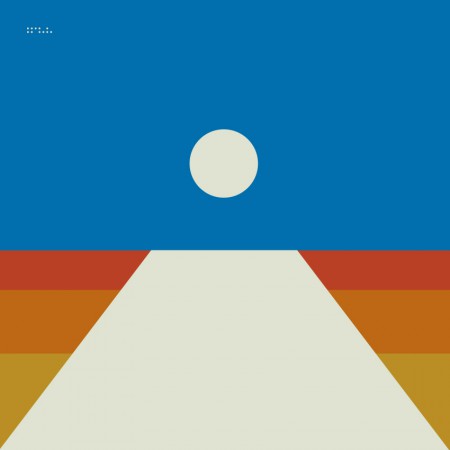 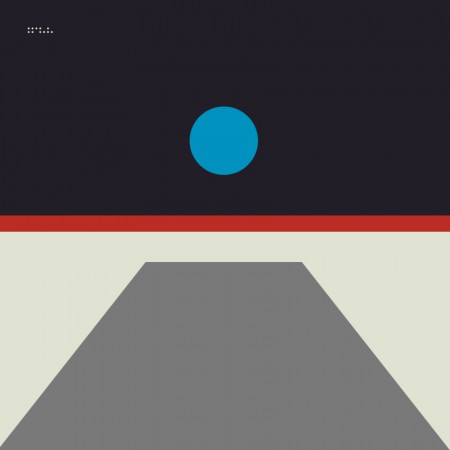 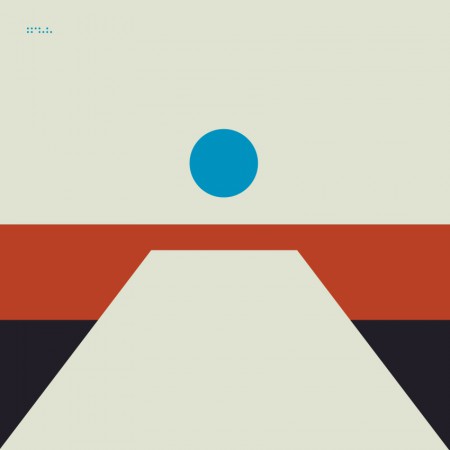 All in all this was an enjoyable and fulfilling process for me as a designer. I’m looking forward to the next couple years, creating future permutations and working with this design/color system. The first example of this is below, the poster for the show at The Fonda in LA. 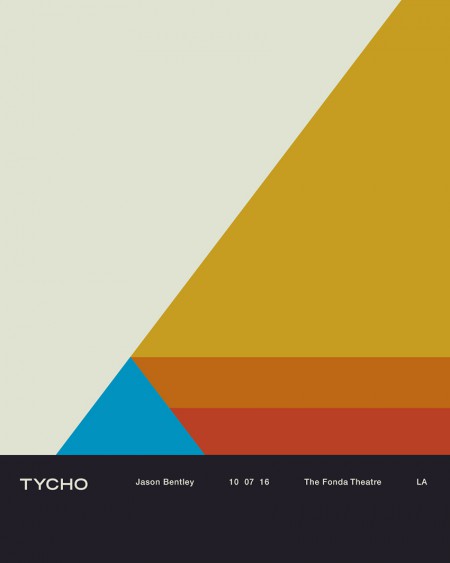 Thanks for reading, if you have any questions leave a comment and I’ll do my best to reply.