Archive for the D. Gookin Tag 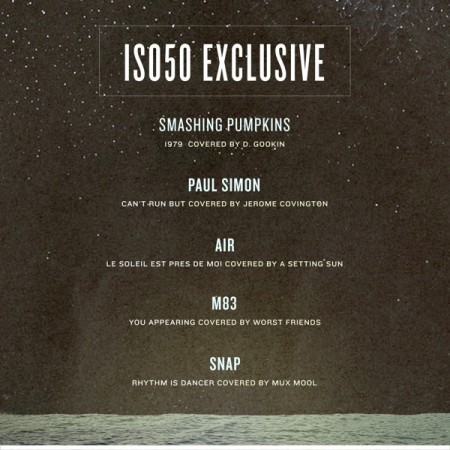 Since the success of the first exclusive FREE EP that we did on ISO50 I asked for some musicians for more tracks of covers and edits.

The Worst Friends duo take the gentler side of M83 and nudge it just enough to open up the track a tiny bit more, kind of like a bright break in the clouds to the originals cloudy day.

Everyone knows Snap, if you haven’t then go to a gym or club and give it about an hour during peak time and it will come on the speakers, I promise. Mux Mool switches gears and takes this roller skating rink classic and runs it thru the arcade and struts down the street with it while saying hi to all the ladies, a definite head nodder for the underground collectors.

Jerome Covington is new to the blog, a musician that I met at a bar while I was djing over a year ago, he did this cover for us at Moodgadget and its still a favorite to put on because it might be one of my favorite songs from when I was a little. The tempo of the original will always feel a bit too fast after you hear this, he added that touch that makes you want sway while you drive down the ocean coast.

If you brought your attention span today then this cover might be one of the more relaxing and rewarding ones, A Setting Sun aka Guardian does a number on Air’s Le Soleil Est Pres de Moi. The dusty howl gradually disperses while the recognizable sounds slowly creep in, it would make any Air fan smile.