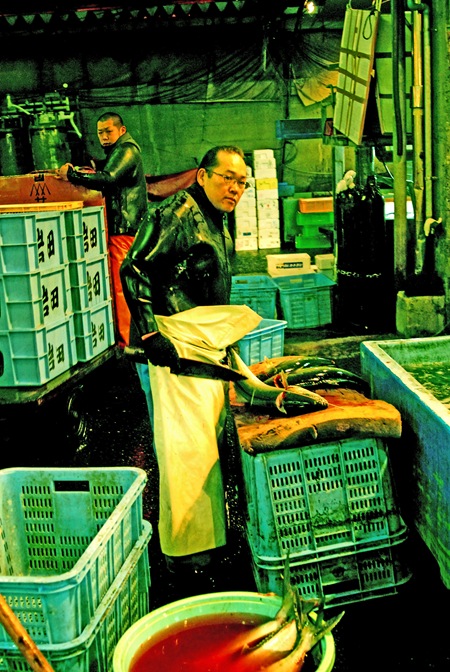 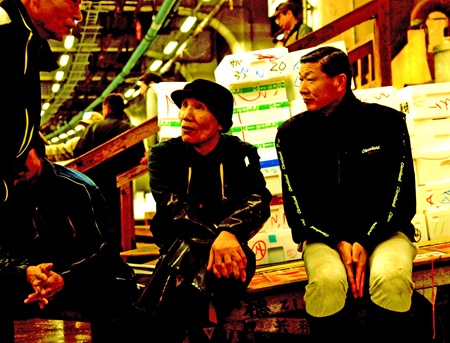 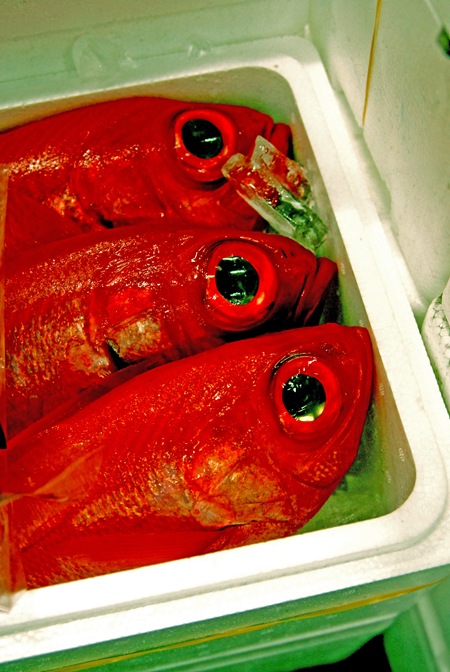 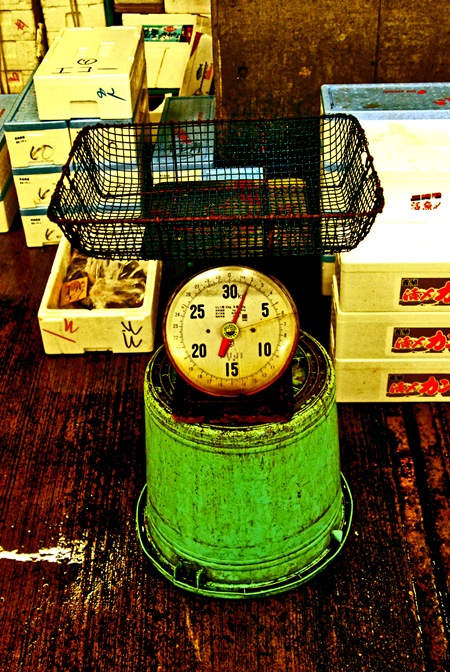 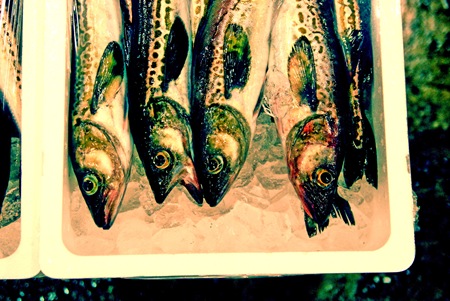 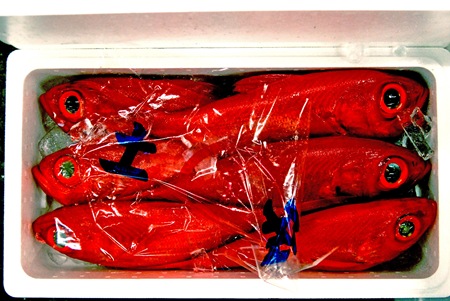 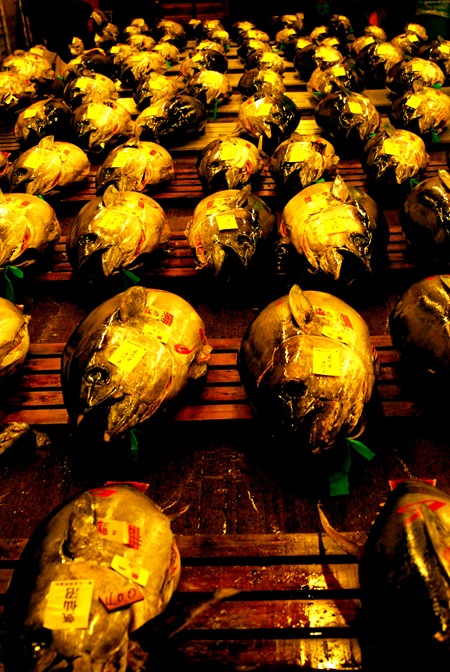 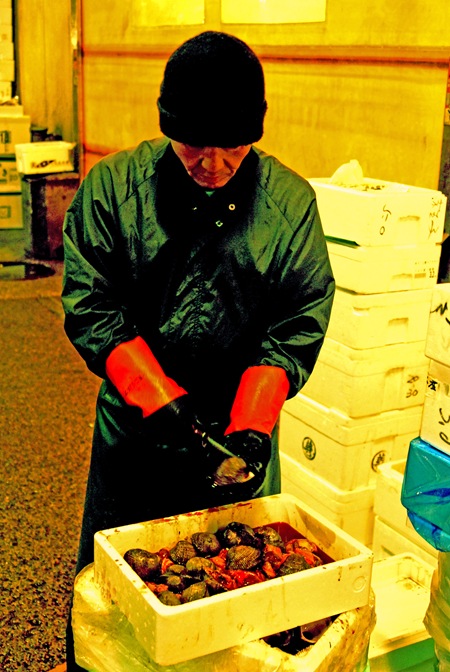 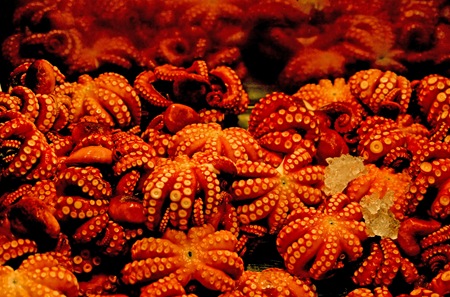 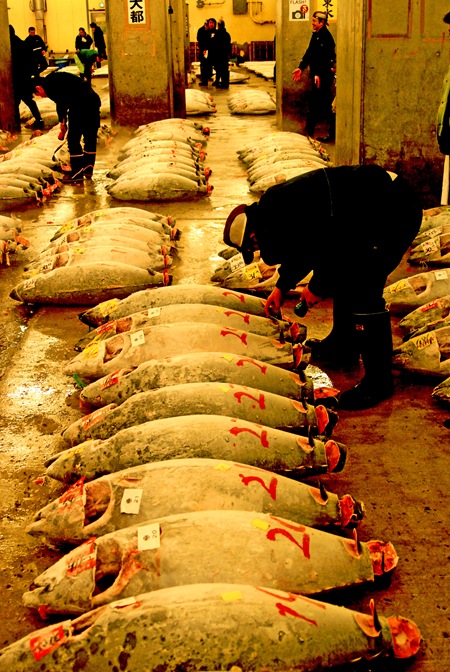 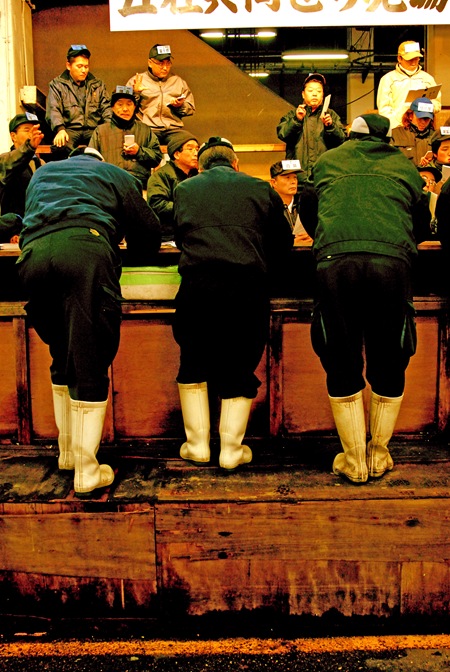 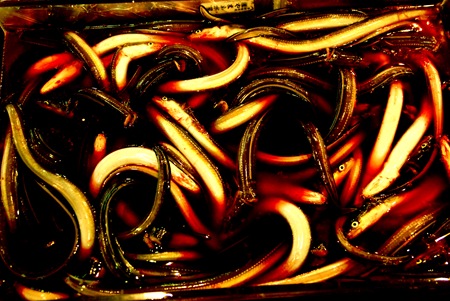 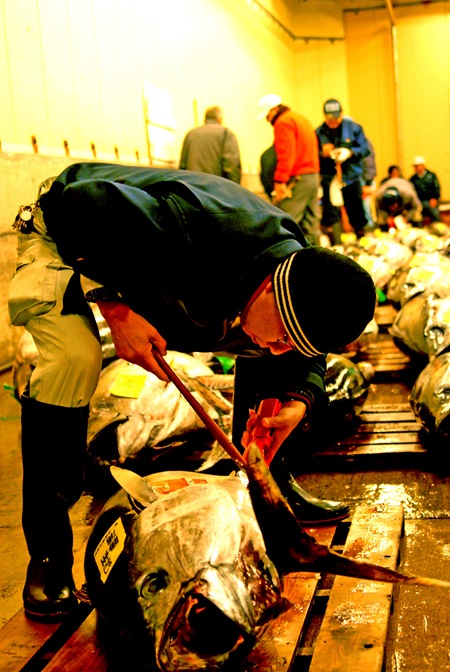 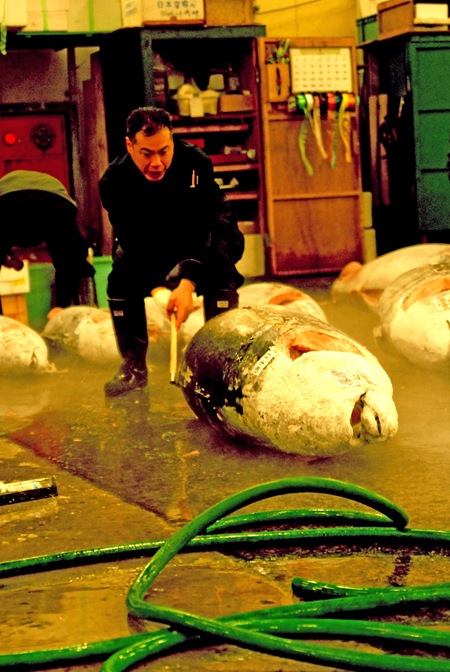 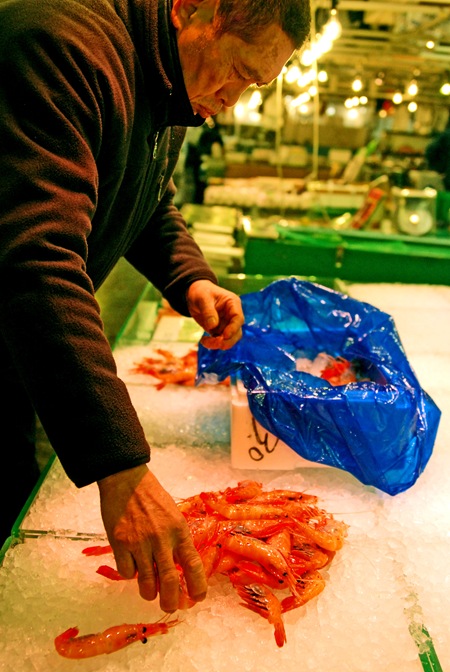 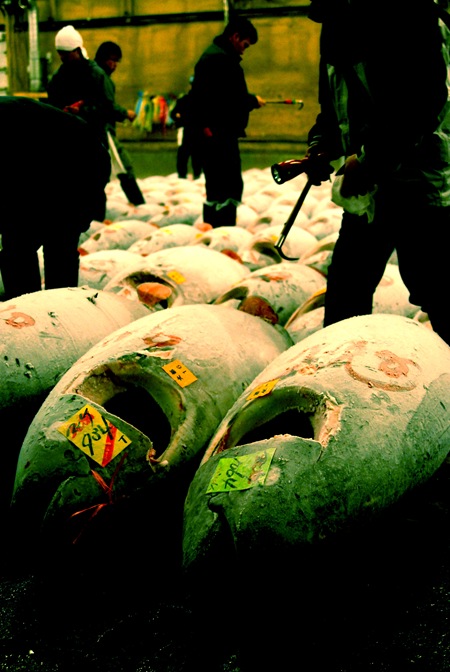 On our last night in Tokyo we stayed up all night to go to the Tsukiji Fish market:

"The Tokyo Metropolitan Central Wholesale Market, commonly known as Tsukiji fish market (Japanese: 築地市場, Tsukiji shijō) is the biggest wholesale fish and seafood market in the world and also one of the largest wholesale food markets of any kind." Wikipedia

We got there around around 3:00, well before the actual auctions started at 5:00, so we were able to see a lot of behind the scenes work and preparations.  The people there were surprisingly accommodating, they let us pass in and out of any areas we pleased and even helped with directions.  Everyone was hustling around working so I was amazed they didn’t just tell us to get lost.  The place was like a bee hive, energy everywhere, people zipping around in these small transport carts moving the catch from the docks to the market area.  Some of it was downright gruesome, the top picture was of a guy we found way in the back. He was butchering live fish one by one using some strange method involving a spinal rod and a large knife.  I seriously can’t believe that much ocean life gets pulled out of the sea every day just in one place, sort of disconcerting to think this is going on everywhere around the world every day, can’t imagine that could go on very much longer.

At any rate, the experience is highly recommended and free.  Your best bet is to just stay up all night and go really early to catch the more interesting stuff and beat the 5:00 rush of tourists (which actually wasn’t too bad).

It’s another rainy day in Amsterdam, been hard to get as many pictures as I would like.  Tomorrow is supposed to be clear so hopefully I can play some catch-up.

Love the colouring you’ve got on these pics. What filter/camera are you using to get this? Or is it mostly Photoshop touch-ups?
C

those fish are HUGE.

Aww, I’ve been waiting for these… Awesome!
I hear that this is also one of the best places to get sushi/sashimi too… Just outside the market at the nearby stalls. Certainly fresh! I would love some tuna sashimi right now actually.

Your in Amsterdam right now?
Or did I misread that part…

Nice photo’s and interesting to read your blog.
I work there as a student for Graphic Design. I work at KNMS Island at formlab (www.formlab.com) for now.

Amsterdam is under a shower like rain, it is actually terrible weather here :-)
I think tomorrow will be a day to get a couple of great sky shots Scott.
If things go as the weatherwoman predicts, clouds are going to be there, like they are in a Rembrandt painting.
With a little luck, they are thick, yellow to dark brown with sun beams coming out.
However, stay away from the tourist spots that end on “plein” (Rembrandsplein, Leidscheplein and such), dive deeper and behind :-)

watch the demo reel. about 1:05 into it.
looks eerily familiar…..

I just watched a special on Humboldt Squid… they attack humans in groups, drag them to the bottom of the ocean, bite, violate, etc. I never want to go into the ocean again.

Just watched the video reel, the part with the guy playing guitar, it’s literally, with no exageration, the thank you card that Scott sends out.

The rainbow/water fall. It doesn’t ‘look’ like it, it is it, traced to the last detail.

I would feel kinda violated unless someone asked me and made arangements, which I guess could have happened here.

You my friend have skills behind the camera. As everyone is asking, are you getting your colors in post editing raw? You have a great eye and are documenting your trip on a whole different level. I am going to start to think about my travels documentation in this way for now on. Be safe man.

Ditto on all the questions about your photography… My first thought was that you were shooting with a Lomo, but my better judgement says it’s P-shop.. Which is true? LOVE the documentation. Your work is always beautiful, and I’m particularly loving the careful attention to design around you at all times. Thanks for sharing!

I see I’m wandering if you use film or digital? They certainly have filimic cross-processed quality but really would like to know your tecknique or is it secret? ANyway all very inspiring stuff. Easy now

As newly registered user i only want to say hello to everyone else who uses this site :D

Hy my name is mnorgovudkka
Im from mongolia
Buy

You have a very interesting forum.

So i’d like to know if someone of you or your frineds was fired because of a financial crisis?

hey there, I’ve saw these when they were first posted over two years ago and I’ve been wondering if Lomo camera’s are even still made.

I love the over saturation on these and I also love Japanese culture, so it was like a drooling marathon every other day a new set of pics would come out. The Bangkok ones are also amazing.