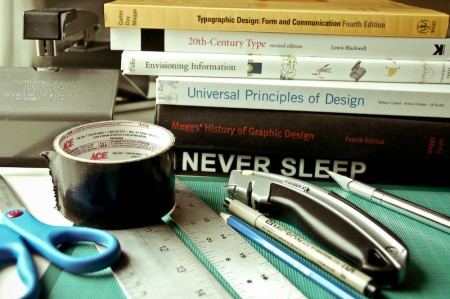 Jessica Helfand wrote an open letter to design sudents everywhere this morning. It is an insightful piece, and I think everyone could benefit from giving this a read really, student or no student.

If you’re graduating in the middle of a recession, it’s likely that an arc of despair trumps the impending thrill of your newly-liberated station in life. Conversely, though, I can’t imagine a better time to get out of school. Nobody’s hiring, but why let that stop you? While the mechanics of, say, having a roof over your head suggest that a little modest income might be a good thing, the actual economics of making work no longer depend on an actual employer. The portfolio no longer means a big black suitcase schlepped around from studio to studio. Get your work online, put your videos on YouTube, and get busy.

I am about 1-2 years out from graduating myself and I already feel the jitters of the “what next…” syndrome. The world of design is changing so fast, every day, and it can be quite an intimidating place to look out upon from within the graduate school bubble. Sometimes I feel like being a student is like being a star college basketball player; floating along no problem in this league—making threes, hitting jumpers, dominating the *paint*—only to be in for a big surprise when you graduate to the Pros and get dunked on by guys double your height and ability that got recruited straight out of high school.

The cries of “nobody’s hiring!” that sound throughout the design world can be periodically distressing, but also inspiring in a backward kind of way. As Ms.Helfand alludes to above, the traditional model of graduate/interview/work for studio is not what is necessary anymore (and thankfully!). New opportunities exist, and as long as you have that hyper-awareness and ready ability to adapt, you can take advantage of them just like before. At least that’s the way it seems from inside the bubble.

It does seem like a scary time to graduate now (and probably will again in a couple years), but the optimist in me agrees with her letter and isn’t concerned. Everything is going crazy and I’ll just try to stay crazy right along with it. Read the full letter on Design Observer.

I graduated in 2007 and spent a year finding work. The last year has been spent in my current job at an interactive agency. I can safely say no matter what economic climate you’re, there is always work and if you’re good, you will get noticed. How fast you’ll get noticed depends on how active you are doing personal and freelance / fun pro bono gigs, while promoting your work online. Never the less it’s a tough transition. Oh, one more thing, even though we have the internet, i think it’s also important to live in a design center such as LA/SF, NYC, Paris. Good Luck Alex, although i don’t think you really need it ;)

Alex, thanks for the post. The article was well-written, and above that, really on point with today’s design and economic climate. Interestingly enough, I’m gathering people’s thoughts on today’s state of design education, and would more than love the ISO50 crew’s thoughts on the matter.

Hahaaa, right. Nice metaphor. I practice for hours with the dangers of exactos, steel rulers, mechanical pencils and the random pantone chip on my side. I’m ready for the battle, just go ahead and try to dunk me, Mr. Pro, I have some tricks up my sleeve! – the random embedded RGB photo! Oh, oh ya!

But, I am glad this wasn’t a reblog of the letter, I think I have seen that eight times on twitter since this morning. I agree, just have to adapt, but not even being in the bubble scares me.

And the Never Sleep book, oh it was a great read. Meggs on the other, well.

I feel bad saying this but this is a nice thought and sentiment, and that’s all it is. You can be busy and be online and be whatever, but you can still be out of work for 8 months too.

Gotta be a hustler.

The only thing I can say is (including me) is that if you want to get ahead of everyone else and else being people who are also in the same boat, if you produce good work, work that is something authentic and it shows you push yourself, you will be surprised by the people who will notice your work and give you work. Everyone is is relying on that social security line where they think they will eventually have a job from someone/somewhere.

Mike, I guess that must be my problem. All my work is based on someone telling me ‘I need this thing.’ and me making that thing for them.

Alex, what school do you go to? I saw your project in the earlier posts and I was pretty impressed…I frequent this blog weekly, and everything it offers inspires me immensly.

This article highlights everything I’ve been worrying about…I just graduated from a studio art: graphic design program at a State school here in CT. It was pretty weak, partially due to the fact that I’ve been a self-taught amateur designer. But now I’m extremely interested in finding a program for graphic design (and/or painting). At least for Fall 2010.

nick- I am at the Academy of Art here in San Francisco. I am about halfway through their graduate graphic design program. I think it’s great you are interested in continuing your education in the field; graduate school offers a different approach to design education and I think you might find it helpful. I have a undergrad degree in psychology, so I can’t speak from first hand experience, but from what I hear, undergrad programs can be quite different.