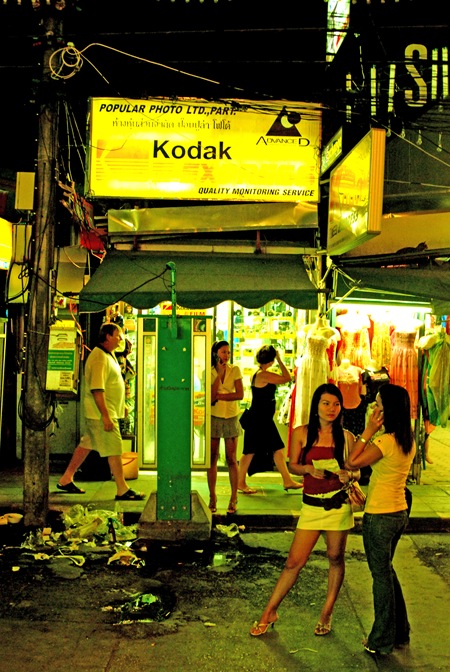 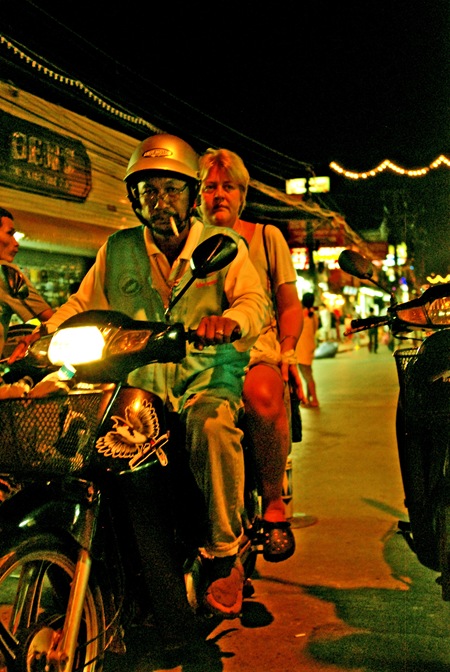 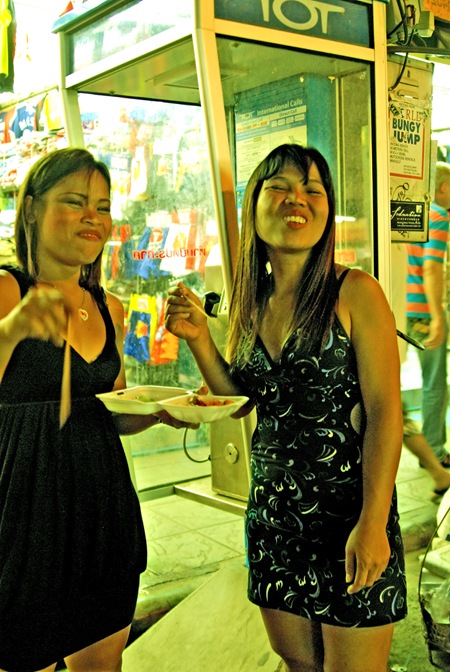 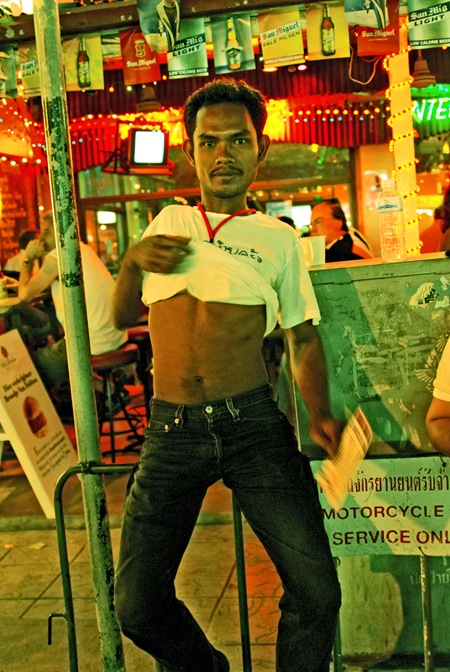 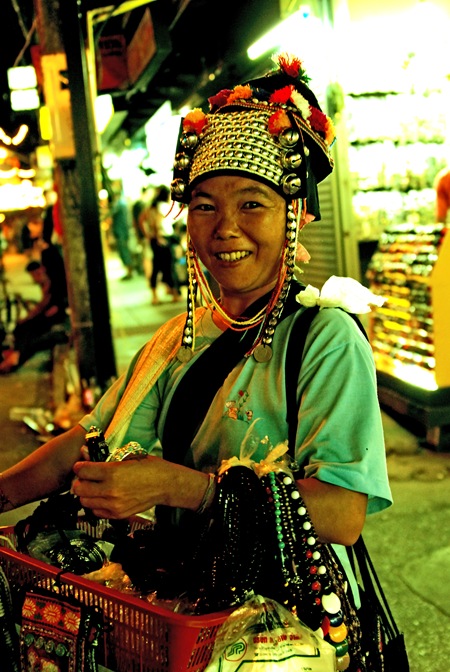 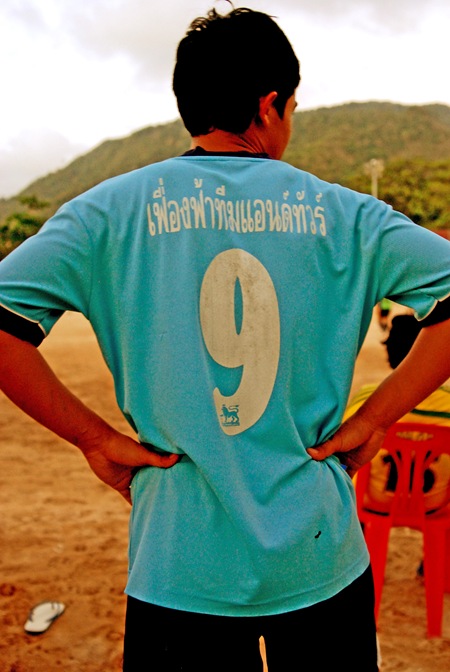 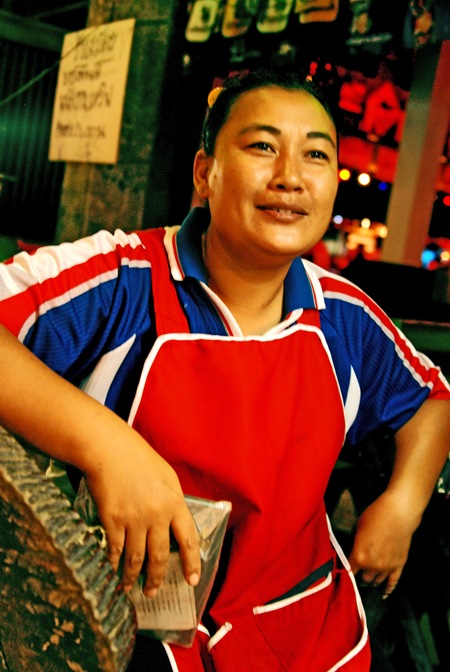 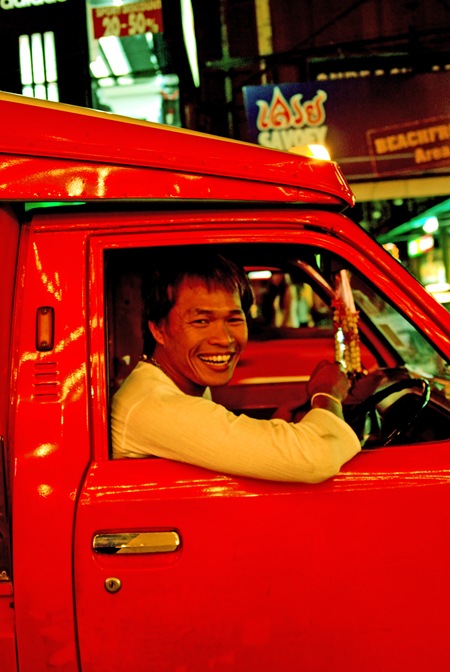 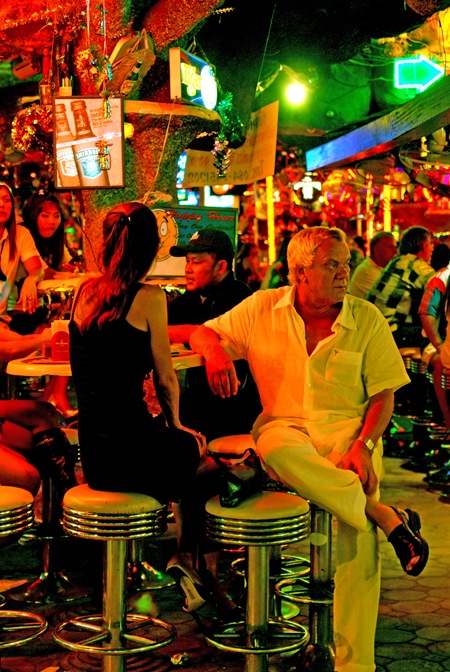 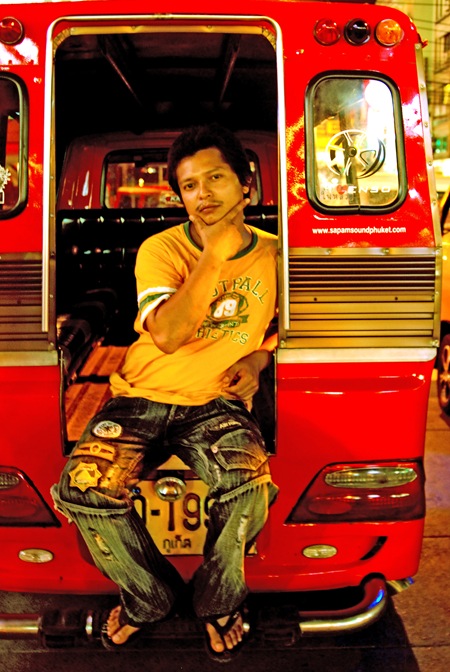 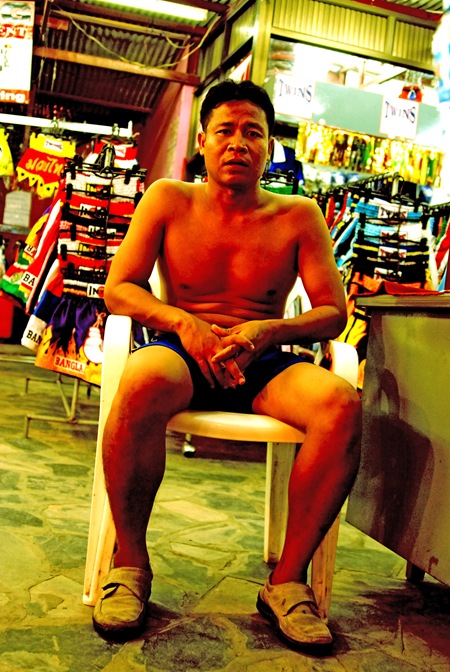 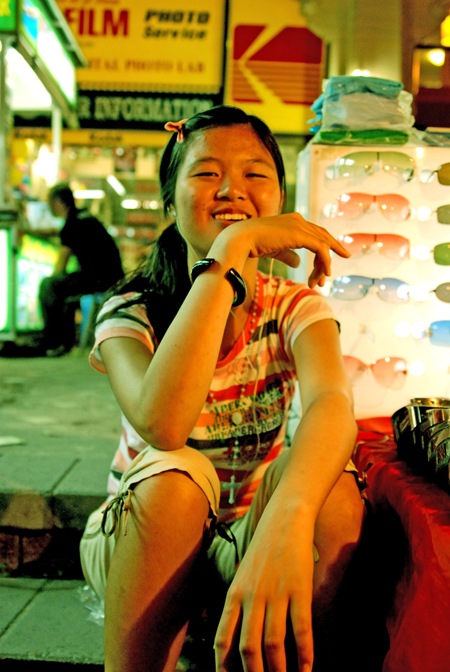 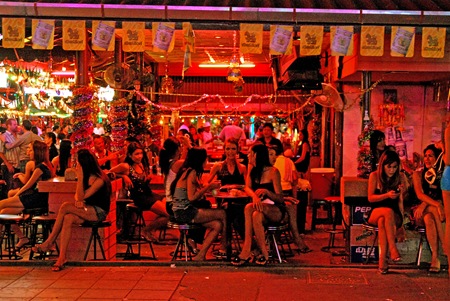 Patong is an absolutely crazy town in Phuket, Thailand where we had to transfer through from Bangkok to get a boat to Phi Phi island, our final destination. Patong is on the beach and people seem to swim and relax during the day, but the main point appears to be the nightlife. I am not sure what I came here expecting but nothing prepared me for the all out sensory onslaught that awaits after dark. In all my life I don’t think I have ever seen so many people concentrated in such a small area drinking and partying. There was a main strip with all of these open air bars and clubs down the side streets (known as "Sois").  This main drag was packed with droves of people wandering aimlessly absorbing the sights and sounds and basking in their vice of choice.  Incredibly, on multiple occasions I saw entire families with their young children wandering through these areas.  I say incredibly because many of these bars and clubs existence seemed to be predicated solely upon prostitution as each of them ostensibly consisted of a bartender and a pack of four or five girls just hanging around (although one couldn’t really be sure of the gender a lot of the time). Eventually some middle aged guy would stroll up and after a few drinks he and a girl would leave.

Visually, the Sois were a photographer’s dream, this was one place I really regretted not having a truly pro rig to take the whole thing in.  I lugged around my Nikon D80 the whole time snapping endless shots while trying not gape in awe of the insanity all around me.  Unfortunately the D80 only goes ISO1600 so it was sometimes difficult to get sharp shots in the lower lighting conditions, but most of the time there was enough ambient light to get away with ISO1000-1200 and avoid the higher noise associated with the 1600 setting.  Many times I had to underexpose and then use dynamic lighting to pull the information out of the low end.  I used to have VR (vibration reduction) on my 8800, I missed having that around as many of the shots came up really soft.

After dark debauchery aside, the daytime was a decidedly mellow affair, lot’s of strolling around in sandals and swimming.  I forgot my circular polarizing filter so a lot of the daylight shots came up pretty washed out, after the second day I sort of gave up on daytime shooting and proceeded to eat constantly. I can’t stress enough how good the food was; virtually everywhere we ate was a new high in culinary achievement.  Even the little run down shack restaurants with outdoor kitchens were great (many times they were even better than the more established eateries).  If you ever find yourself in Patong the first place I would recommend to eat is a spot right around the middle of the beachfront strip called "Chez Bernard". Get the whole fried fish with Thai chili and the squid fried noodles; you can’t lose. Unless, of course, you’re allergic to fish, squid, or Thai Chili sauce, in which case you could lose, in a big way…Because at least one of those things seem to make their way into pretty much every dish.

The Thai people in general were really mellow and friendly but I know I didn’t get any true sense of Thai culture.  We rented motorcycles to ride up the coast one day and found a small town with an outdoor market.  There were only Thai people there and it was way out in the country so I think that’s as close as we got to seeing a day in the life of Thai culture but we were still very far from immersion on any level.  We spent the last few days on Koh Phi Phi Don island and diving the Nok islands, got some decent pictures there.  Phi Phi is a another world altogether, but I’ll save that for another post…this one is already excruciatingly long I am sure.  Hope everyone is well, I’ll see a lot of you soon in Stockholm.

What an adventure man! It’s really great reading, and when I can finance it, I’ll go travel myself! I wish I was there to see all the things you’re writing about.

Photos are one thing, but to be in the middle of it… priceless!

Yeah Stockholm will be awesome I’m sure. A nice contrast to the moist and heat, hehe.

Would love to get a bigger autograph than the ones I have on the posters :) And hey, maybe a photo of all the great people participating in the workshop and you together? That would make a nice memory I think.

Great photos.. The whole ‘series’ in recent posts has been really nice; thanks for posting them. I really like the one here of the older white guy on the bar stool.. Wonder what’s going on in his head(?)

Great photos, again. I’m really enjoying seeing/reading your experience. How are you finding the language barrier?

I’ve been admiring your photographs from your trip and just thought I’d delurk and tell you so. The typography in Japan has just been lovely and now these portraits. So lush and colorful. I can’t wait to see more.

I keep wondering while looking at your photos how you approached taking pictures of the locals. Did you intone that you were going to take a picture and thereby passively ask for their permission or was it more of a spy operation of quick shots? I constantly struggle with this dichotomy and wonder how you pulled of such natural shots.

I’m wondering the same thing as Bobby. How did you get those pictures of people?

wonderful pictures, but I cant help but feel that they are kind of over-photoshopped. I would like to see more of the natural picture come out as well.

I never would have guessed you were using a Nikon digital camera for these shots… they have such a feel of old film to them. Like expired film, even… with the odd color balances and light sensitivity. How much do you process the original shots after you take them? I’d love to lend a look like this to some photos now and again.

I don’t know why so many people insist on hate’n on the post production photo techniques. Since when is it up to someone else to decide what method is or is not appropriate for an artists to use to create their work. I mean, the camera has already done about 90% of the technical work already, how are people going to get their undies in a bunch over a little photoshop work. We are in need of another Duchamp revolution for sure. Keep up the great work Scott, and please continue doing whatever it is you do to YOUR photos so we can all continue to enjoy.

and what’s the hell the guy in the 4th photo doing :))? is he tryin to seduce you or something?

:-” last comment correction > ‘and what the hell the guy in the 4th photo’s doing’

Beautiful shots Scott! The guy in white sitting at the bar really captures the scene…

Would really love to learn more about how you did the post production in photoshop! Lovely effect/result!

Inspired photography, really makes me want to explore Asia sometime in the near future. To have the bravado to capture candid pics of random folks in the street is always something I’ve had a lot of respect for, as its something I’d really struggle with.

The post production is also very cool. As a fan of old school toy photography and SLRs, I couldn’t help but explore (google) a few techniques around cross processesing in photoshop to try and simulate this method. Changing the image mode to Lab Color and messing around with the Unsharp Mask in the Lightness channel seems to work wonders. Then playing around with the curves in the a and b channels, to maintain that cyan and yellow loveliness.

Love it man. Peace and love.

Good stuff!
Tell me a little about your camera setup:
Are you using a tripod, many if not most photos are taken at night (without flash?), and surprisingly sharp.

I was watching my local news last night and they aired Part 1 of a 3-part series surrounding pedophilia/forced prostitution in Phuket (and other areas whose names escape me now). And it reminded me of what you wrote in this post. I won’t get into the details, but it’s safe to say, I’m completely traumatized after seeing/hearing the report…

Excellent set of snaps, love the blue of the guys football shirt in photo #6.

read about the thai article that you posted. it sounded so well, like it wasn’t in thailand. after all, all you see .. isn’t the real thai culture though.
at that place it’s all about pleasure and party, so on so on.

hope you didn’t had a bad experience in my motherland.

talk to you later,

luscious palette, man. your illustration feels like color photos from the 60s, all yellow and narrow dynamic range, which is nice; you might try to get this happening in your nighttime photos–the fluorescent white blows out my retina and makes a couple of the photos harsh, but then i guess that’s sort of an accurate depiction of what the bars feel like at night.

if you find yourself back in thailand, try to see more of bangkok and ayutthaya. fantastic night and weekend market photo ops abound, and income distribution is so extreme in bangkok that you won’t believe the contrasts you’ll see. another plus is the beauty of the skytrain rail system.

i think you probably need to get pretty far from phuket to realize an experience of the “real” thailand, although the “real” thing probably gets more and more like L.A. every single day, which is a shame.

i haven’t been to stockholm in almost ten years, but what little of it i remember was clean and neat. i remember enjoying the design on the walls of the subway stations; at the time they were all newly remodeled for some sort of cultural festival in 1998. i hope they’re still as attractive.

anyway, thanks for the attention to detail in your work.