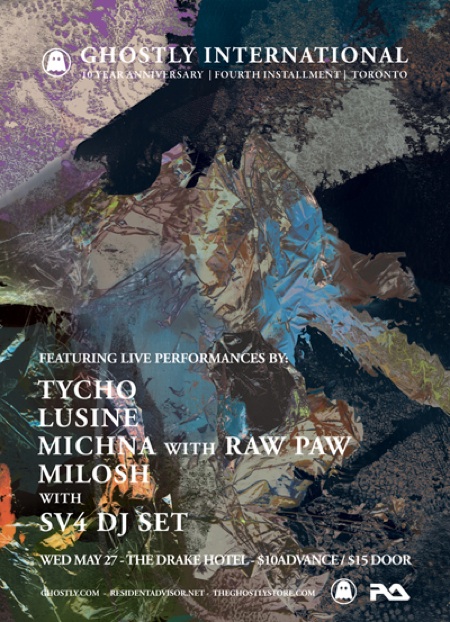 Congratulations on 10 great years guys! Thanks!

It’s always an absolute joy to hear something new from Tycho, keep up the good work!

Beautiful remix of Coastal Brake. Looking forward to the release.

Manual and Tycho…what a country!

I remember the early days of going to the Blind Pig in Ann Arbor to catch Dabrye and Midwest Product shows. I knew then what you guys were doing was fantastic, and it’s great to see Ghostly is still going strong!

love the remix – can’t wait to hear the new release this summer.

Such good music. Been looking forward to new Tycho and Milosh, can never get enough! Wish I could make it to the show!

I love the new Tycho remix, and btw, what’s the deal with Raw Paw and Michna, aren’t they the same person???

Michna is the producer and solo artist, raw paw is his touring band

Instantly loving the Tycho remix. Looking forward to the album also. Liked all the tunes on this post actually. Good job Ghostly.

So sad I have not seen you yet live!! Jealous of this show :( Congrats and keep rockin it :D

Hey Scott,
Glad you’re back in TO! Those sound great can’t wait to hear them live! See you and the rest of the crew at the show.
Cheers,
Sean
The Buzzoutroom.

i wake up I listen, I’m working and i listen when i can, i go home i listen as much as i can, this new song is like a prison to me, cant get out

Thanks for the well wishing everyone. Really having fun posting with the ISO crew. Grab me at the Detroit/Toronto shows and say hi to Jakub and I. – I look like this guy but nicer: http://ghostly.com/news/2009/5/478

Love the Tycho remix and the Lusine track.

Wish I could be at the show. Tycho makes some of the most serene music out there. Looking forward to the new album.

Impressive musical lineup. All of the songs were great, of corse I’m partial to the Tycho one. I can’t wait until I can purchase these gems!

where can i find the coastal brake remix ? for purchasing

The Coastal Brake single is currently in production for a release later this year. Scott’s latest update: http://blog.iso50.com/2009/08/27/studio-update-august-2009/