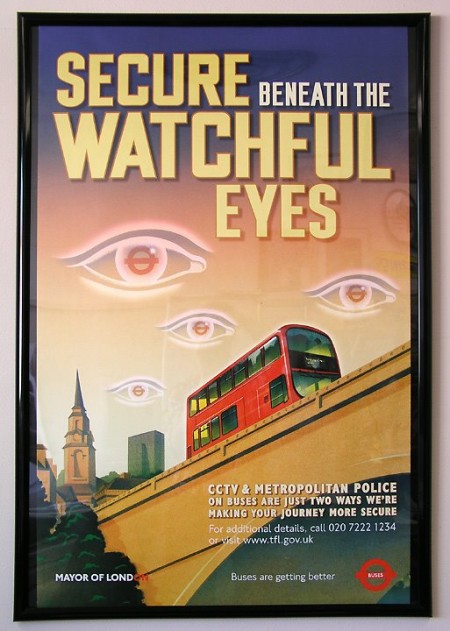 At least ours (the US one) looked cooler.

Looks like “staring eyes” on a poster supposedly creates a psychological effect on the viewer.

As a side note: As of 2007, author William Gibson thought these posters were “madly hip”.

Scott-
at first I could see these as being somewhat hip, like maybe they were trying to be campy or something. But the one time I was in London, a plain clothes officer popped out of some sidehatch and started harassing my brother and I, questioning us, saying he was going to arrest us if we didn’t leave immediately. what were we doing? taking pictures of buckingham palace, which I thought was a tourist landmark. anyways, hip or not, those eyes *are* watching you.

this poster is beyond creepy

texas-
this is a well documented poster, a simple search of the title will turn up pages of related articles:
http://www.google.com/search?hl=en&safe=off&rlz=1C1GGLS_enUS303US303&q=secure+beneath+the+watchful+eyes&btnG=Search

It’s a beautiful illustration. Shame about the ugly text though. And what’s up with Mayor of LOND (on)?

I’ve seen this – and I think it’s important to look at the context. London has become a rather violent place to live especially with the rise of knife crime. New York, where I live, is considerably safer. Riding on a bus at night can be a risky endeavour and it’s not like the bus driver behind his glass shield is going to get out of his booth and help if you’re in a spot of bother.

Saying that cctv culture in the UK is overkill. The response to an unsafe society is not more eyes but social and political motivation to cure the ills of the society that breeds this anger.

Seems like another tool to push a police-state agenda in after the wake of 9/11 under the guise of security. Perhaps what surprises me the most is how blatantly true this message is and the soviet/cold-war/propagandaish visual inspiration. It’s like it would be hip and tongue-in-cheek if it wasn’t true.

Why the designer would want to go that route visually and make that connection is very strange. Seems like you would want to be as subtle as possible.

Interesting, I wonder how many liberties, rights, and freedoms we’ll end up losing in the name of safety and terrorism. It’s not the governments job to save you from yourself.

saw this poster yonks ago, it’s a fantastic piece of work …. an obvious tongue in cheek nod to “big brother” …. and wartime paranoia “walls have ears” “loose lips sink ships” ….. as for the comment on the clumsy type, it’s perfect …… looking back on an era of hand drawn lettering.

excellent stuff, it’s only fault being it may be a little too clever for it’s own good ………..that said, if you don’t get it then that’s very much your problem.

ever heard of irony?

Yeah, I remember these. They were definitely posted around London for quite some time. I think they were so shockingly Orwellian that people thought they were a joke. I still can’t find who the commissioned artist was? Anyone got any ideas?