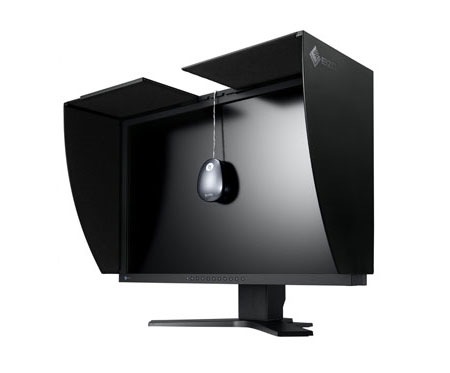 I have a ViewSonic VA1912wb And Enjoy it very much, though I don’t use it as much as my laptop’s screen. A majority of my work is on my macbook pro, though you have to be careful of the angel of screen, as the color can change. Both are calibrated with a i1Display2 (http://www.xrite.com/product_overview.aspx?id=788). I use a better version at my work for creating custom profiles for our large format printers. The calibrators that can create custom profiles I’ve seen go higher than $1,000, but its well worth it for creating your own photo prints, soft proofing colors, etc. I do think Eizo is by far one of the best from what I have heard (have had no hands on experience). I have had no problems with mac monitors, but seeing as your are using the PC, that wont help. I would say that The ViewSonic is a good monitor at a good price. Go for wide screen and larger is always better if you can afford it. I have heard DELL is good monitor in general but I am not sure for graphics and photos, and I would stay away from HP. My sister has an HP monitor and I don’t like how it looks color wise.

Hope this all helps, let me know if you have any other questions, maybe I can help some more.

By the way, i love the blog/site/work/etc

I heard Dell UltraSharp displays use the same core electronics and screen components as the Apple Cinema displays, just in a different (er.. cheaper) package. So I bought one. Not one bad pixel in 2 years. Consistently bright, great contrast and tonal range for my design needs.

I’m the happy owner of an LG 1900R LCD monitor, wich is great. Not only the exterior design, also the performance. It’s very bright and with high contrast (2000:1), and of course a response time of 4ms, that in apple cinema displays i think is so much higher (slow response). It brings its own calibration software (forteManager), and it works fine to me.

CRT is hands down going to give you the best color, contrast ratio, and response time. Keep an eye out for OLED monitors which eventually should (in theory) finally surpass CRTs. For now though, if you want the best, you have to put up with the terrible huge form.

I feel your pain, Scott. I have a Dell monitor on my PC at my day job and I can’t get the colors to look right worth squat. Which is too bad, because we have a big expensive printer that can color match really closely to pantone and other swatch books. So I’ve decided to not worry about it and rely on my pantone books and press checks for good color. I can do that given the nature of hte stuff I’m designing, though. If I was creating custom blends and tones like you do I’d be pulling may hair out.

the eizo’s are the nicest LCD’s i’ve worked on. don’t go crazy and get the super model CG241w get the 1,300.00 CE240W. that’s what i have. the feature i like best about it (beside color) is that the calibration software is made by EIZO and it controls the hardware of the monitor, rather than controlling the output of your video card like most calibration software. the response time on it is not super fast, so dont plan on playing quake on it. from what i read, the GG241w’s are just the top 5% of the regular CE240w. that’s right, same screen, they just sell the ones that come of the line closest to perfect, sold for a premium. (i noticed that on the eizo site it now says “NEW” next to the CG241w’s so perhaps this has changed- it also seems like they used to cost 4,000) anyways, good luck

Don’t laugh, but this is how we did it at my last job. We didn’t have a color inkjet, nor were we allowed to go on press checks. We didn’t have a monitor calibration solution like the Spyder either. What we did is have one person, the sr. designer, go around and calibrate the other two design PCs (Windows boxes with Apple studio displays) using the old Adobe Gamma control panel. With this as a baseline, we’d do a job and wait for proofs to come back on it. Then we’d adjust a monitor to look like the proofs we had received, then go and add or subtract color values based on that. Some printers had given us custom setup configs but this is how we did color calibration for 2 years. The other thing we did was stick with the process versions of Pantone colors. The real frustration on that job was trying to get things that wouldn’t look right unless printed in hexachrome as close to color accurate in CMYK.

At home I use a Samsung Syncmaster 2232BW and a Pantone Huey. I am curious about Matrox video cards for the home design pc.

I use a SyncMaster Graphic Series monitor. It’s a big clunky CRT Monitor but I’ve noticed that the colors always reproduce very accurately. It takes up too much room though!

I’m a Mac user, so I’m using the Cinema displays and get really nice colour. I’m also a big fan of the NEC MultiSync 90 Series, and the Samsung SyncMasterTM 214T or 244T. Both nice displays. They just come with lots of needless software.

Not sure if you mentioned yet or not, but what is your method of color testing?

ah – just got a chance to fully read. LCD, gotcha.

I went through the same dilemma a few years ago. If you don’t mind CRTs, they have the best color reproduction and cost very little, but for me I find CRTs tiresome on the eyes. I ended up buying the LaCie 321. I believe it is based on an NEC monitor, though tweaked to perform better. LaCie is an excellent brand, second only to Eizo.

I’ve had this monitor for nearly 3 years now, and I still look forward to turning it on every morning. The color is superb and completely even in every part of the monitor and from any angle. I calibrate using the Spyder2Pro and it seems to give an accurate rendition. A good monitor is DEFINITELY worth it. I only use PC (and have no desire to ever change).

I’ve ran my 23″ Cinema Display succesfully with my PC and no problems. I did however have to update my videocard but thats a few hundred. Since, I’ve reconfigured my PC to run with my dual 17″ Samsung’s 172X, but I recommend running those digitally and because they’re 17″ they’re likely somewhat out of the market.

The 23″ Cinema Display is now home to a Mac Pro and it’s the best monitor I’ve ever had the privlidge of working with. On my PC a while ago, I was able to go picture print perfect on the 23″ while working on FITC’s creative. Now that it’s on the Mac, I use it daily to continue a lot of the same, but there really isn’t any reason I’m aware of not to run the Cinema Display on PC, worked great for me.

Thanks everyone for all the great info. I am thinking the best be might be a CRT and the Eizo Daniel H talked about. Work on the LCD then proof on the CRT? My main issue with CRTs is the noise though. I do my design work in the same studio where I record music and that noise that CRTs start to make after a while can cause interference and background noise in recordings. Either way, doesn’t seem to be an easy decision.

I would not worry about a CRT, if you get a good desktop LCD, that is calibrated then you are fine, I would just be careful of laptop LCD, and follow the specs of the printer (if it is a professional printer). Though I will say I have had things printed with images adjusted on laptop and they came out just fine. If you are printing on your inkjet, its always good to have that calibrated as well, but as I said before those printer calibrators can be a little pricy. A while back I borrowed my boss’ printer calibrator to calibrate my canon ip4300 I got for free with my macbook pro, and the images that I printed were amazing and were an exact match as you can get. Funny thing is though once I did that I did not want to go back to using the standard printer profiles. Also as a side note, its always good to profile your printer as well as each paper type the print is going to be printer on. The colors can shift dramatically with the change in paper.

I was lucky enough to get a LaCie 22″ CRT before they were replaced by the LCDs. CRTs are far more reliable. LCDs tend to ‘read’ differently depending on the angle from which you are viewing. (I certainly can’t manage an entire (four to eight hour) retouching job viewing a monitor from the same exact spot with the same exact angle–in degrees–as some manufacturers recommend.) LCDs also represent variations of black poorly.

Unfortunately I cannot find a vendor selling the LaCie CRT.

I use a NEC Multisync 2690WUXi… not sure what they named it in the us. It´s a nice LCD for the money!

Boy there is a lot of bad info here.
First the top line LCD’s Eizo Cg241W, Nec LCD2690WUXi and Lacie 526
Are the top 3 selections for color calibration that equal or surpass any CRT that would be worthy of consideration when all aspects are considered.
2nd party calibration hardware is the way to go with the above except for the Lacie which has blue eye.

Hehe nice monitor. Now I use ViewSonic Vg921M. Next step I buy only Nec or Apple.

I know you can see this, Scott, since you’re using WordPress, even if it is an old post.

Can you update me on whether or not you’ve found a good, reliable monitor since then?