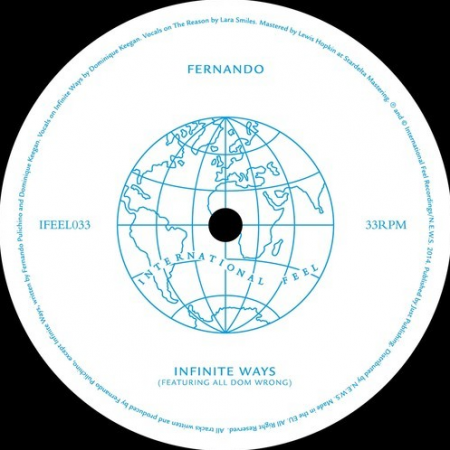 International Feel had me at the Gatto Fritto album a few years back then Mark Barrott LP hit me hard this year and then I got to preview this single Road Music by Fernando a bit early and had to share it with you guys. Its a return to Italo but less stylized and has some innocence left in it instead of a making pop to make pop feel to it. The full EP is above and out in mid October, vinyl link below, don’t see a pre-order yet though.

The artist known as ‘Fernando’ once washed up on the shores of Uruguay after a freak boating accident off the coast of Carilo, Buenos Aires in 2008. An incident that occurred while on a submarine studio mission conducting sonic experiments aboard a renovated and highly customised Uboat circa 1945. Free from constraints & operating outside territorial waters, Fernando was putting the finishing touches to a new collection of music, setting out to bottle those sweet and indescribable moments in suspended time and space when we feel weightless and surrounded by sounds richer than reality…. an inexact science, yet a universal privilege that life and ears afford us. Presumed dead, what in fact happened was a serendipitous encounter between the lucky survivor and a roaming associate of International Feel, who, during a walk along the sands of Punta Del Diablo, found an airtight USB stick clutched inside the hand of a partial amnesiac, dazed and shivering but with a sly smile stretched across his sun and sea worn face. It seems that whatever Fernando was looking for, he had found and thanks to the saviour of that day and (much further down the line) Fernando’s blessing, it sees the light of day on October
13th, 2014 in all good record stores.

I miss your 4 track posts from different artists that you used to do. You have impeccable taste, and I’ve discovered so much great music that way. It has kept me coming back to this blog for 6 or 7 years!