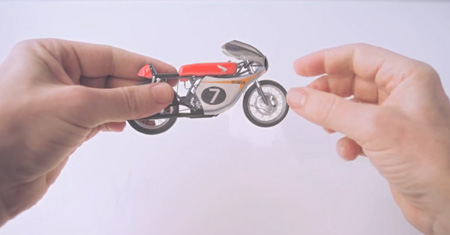 I’ve always loved miniatures so this short film for Honda is quite a treat. The tone and style are perfect; feels really timeless. And the exhaust from the motorcycle is a nice touch. Couldn’t find info on who did this so maybe someone can fill in the blanks.

i expected to skim through that but it was over too fast. impressive. the bike folding out to the four wheeler was a pretty cool touch as well

It was created by Wieden + Kennedy, London. The directors were Smith & Foulkes from Nexus.

Commissioned by nexus but Analog made it http://www.analogstudio.co.uk/work/honda

It’s a tribute to Ayrton Senna.

@Jean @Vitor – It’s not a Ferrari, it’s the Honda NS-X, and Vitor’s correlation to Ayrton Senna is correct. As a driver for Mclaren/Honda, he was instrumental in testing & helping designers sort out chassis design & setup. He was also a driver very popular with Japan’s motorsport enthusiasts.

“Honda spent a great deal of time and money developing the NS-X. With a robust motorsports apparatus, Honda had significant development resources at its disposal and made extensive use of them. Respected Japanese Formula One driver Satoru Nakajima, for example, was involved with Honda in the NS-X’s early on track development at Suzuka race circuit, where he performed many endurance distance duties related to chassis tuning. Brazilian Formula One World Champion Ayrton Senna, for whom Honda had powered all three of his world championship-winning Formula One race cars before his death in 1994, was considered Honda’s main innovator in convincing the company to stiffen the NSX chassis further after testing the car at Honda’s Suzuka GP circuit in Japan. Honda automobile dealer Bobby Rahal (two-time CART PPG Cup and 1986 Indianapolis 500 champion) also participated in the car’s development.[7] Senna was given two cars by Honda. The newer one, a black 1993 model, license plate BSS-8888 (the letters meaning Beco – a childhood nickname – Senna Silva and the number 8 is a reference to his first F1 championship in 1988) is still in his family’s possession.”

Here’s a great video of Senna lapping Suzuka in the NSX:

I like your blog. You efforts putting this blog together was worth the while. Thank you for the info Scott.