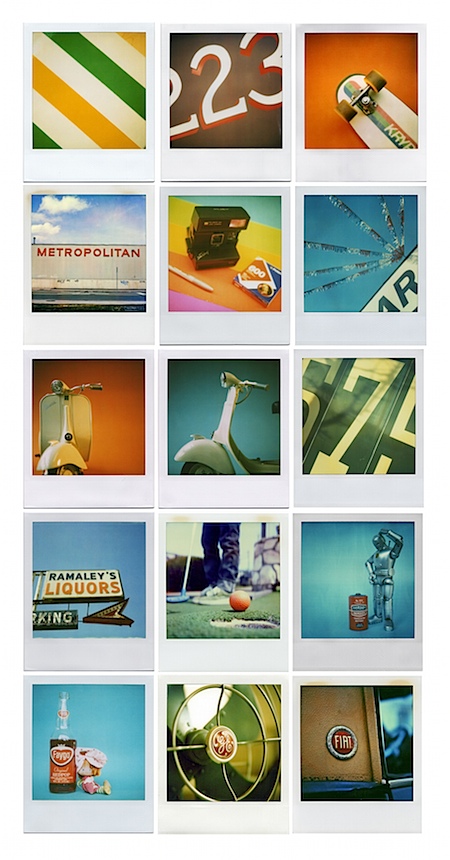 In case you missed it, Polaroid has ceased production of it’s iconic , eponymous film. The company says there’s enough to last through 2009, but after that it’s all over. Shaun Tubridy set up the Save Polaroid site to raise awareness and CNN ran a piece on the whole situation and Tubridy’s efforts. Turbidy, a graphic designer, is also an avid Polaroid photographer with a very nice flickr portfolio, the source of all the images in the collage above. Pretty sad to see such a wonderful piece of pop culture be pushed into extinction by digital, but I suppose it was inevitable. Let’s hope Lomo or some other third party picks up the torch and finds a way to reproduce Polaroid film. How man of you use Polaroid film? Has the production shutdown effected you yet?

Update: As Jones pointed out in the comments, Polapremium.com is still selling Polaroid film but, as the name implies, they’re selling it at a premium: $15–$130 per pack. At prices like these, just buy a medium format Rolleiflex with the money you would have spent on film.

I picked my first Polaroid camera, a Polaroid OneStep Closeup in Saudi Arabia and since then I have been fascinated with the camera I carried it everywhere. To be honest, Polaroid films are a rare sight in Malaysia, and I was lucky I found it in two stores in my neighborhood.

I was probably their only Polaroid user, and they stopped stocking up about 6 months before the Polaroid films cease announcement despite my constant request and it broke my heart. To date, I have only about 300 Polaroid photos and I too turned to lomography. Digital just doesn’t have that sort of satisfaction I was looking for, given the fact that we can edit them before they are printed.

I am a long time Polaroid user. My wife and I met using a Polaroid at a party and we have documented our whole relationship using one. Even when we eloped, we brought along a Polaroid and not our family. Ever since we have been filling our walls with Polaroids of all our moments as well as taking more artistic shots. Although I may never have the time to scan them all; I have posted some on Flickr. We have boxes and photo albums everywhere full of Polaroids. It’s our obsession.

I really hope someone takes over, I only have so much film stocked up and the student life doesn’t offer much money to buy more at inflated prices. Great post Scott!

my first camera was a polaroid sun600, i still have it and aside from the difficulty finding film these days it’s still in perfect working order. i still shoot with it and will be very sad when i can no longer produce new images with that camera.

as all pervasive as digital has become there is still something so magical about holding that piece of film in your hand and waiting for your image to magically appear. it will be sorely missed.

I’m going to hit up the local walmarts this weekend and buy some more packs with my christmas bonus. I have to say I will truly miss using my sx-70. I love that it’s an SLR and that it can get way closer to your subject than your traditional 600 instant. Also, Fuji still produces normal packfilms and 4×5 polaroid films. I’ve played around with both formats and they’re actually even more functionally and aesthetically enjoyable.

check them out…
http://www.rwhirled.com/landlist/landdcam-pack.htm
be sure to drool at the professional/advanced models…

I recently was given an Argus C4 that was originally my grandpa’s. Taking 36 shots takes awhile if you’re not a photographer and just carry the camera with you. So you start to get really anxious and excited when you get in the 20’s. Then when you get your roll back and start looking at all your images it’s like having the orgasmic power of watching 36 polaroids develop.

“the idea of waiting for something makes it more exciting” -Warhol

I was under the impression http://www.polapremium.com would continue to sell film and new specialist products in a similar way to http://www.lomography.com/ for the foreseeable future. It is however very expensive.

I have only used 600 film in my SX 70 so far, with an ND pack filter which gives very blue tinted results, great for water shots. I ordered a few packs of Artistic TZ from Pola Premium which should generate better results.

I’ve never really been a big into Polaroid, but when I heard they were ceasing production my interest in the film piqued. I still haven’t gotten around to getting a Polaroid camera or film, but it’s on my to-do list.

interesting that he gets his recognition from a digital medium (flickr). There is some irony in there, no? An uncomfortable meeting of the limits of nostalgia and the accessibility of technology…Polaroid had its place, but i cant blame them for closing the door on a niche trend. Maybe someone can make a psd template and the world will continue to turn.

Polaroid owns a patent for instant photography. They run a nice operation selling their overpriced film and suing anyone who ever went into instant photography (ie. Kodak), hence lack of competition or advancement in the field for long years.

Let this be a warning to all monopolies.

I thought this day would never come. So sad.

Ive never been a big Polaroid shooter, but I was sad to hear the news earlier this year. Oh well… on a happier note, I just got my hands on a 1956 Rolleiflex medium format camera. It’s bad ass! Looking forward to crabbing some 120 and testing this monster out.

it all so sad