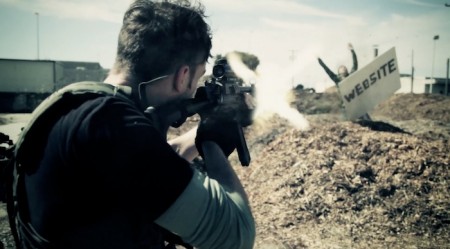 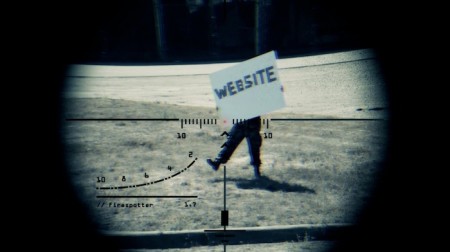 The first video sort of created this fictional universe, where webpages are giant pieces of cardboard and our employees are essentially Special Forces teams. The followup video was to be an extension of this metaphor and use all of the same “characters” as the first one. We imagined that given the success of the first video, the Special Forces team that our company employed would suddenly be in high demand. As such, they would make a highlight video to entice prospective clients to hire them for various needs. Clearly they were adept at taking down rogue pages, but they had other skills to offer.

It seemed fitting to pick five of their best tactics and show video footage of examples of each. I decided their marquee tactics would include words that could easily be construed in a military fashion, but that also had technical origins, such as defragging, or firewalls. “Firewall removal and circumnavigation” is the first, and this shows the team presumably taking down a firewall (two random hooded bandits) and rescuing the web content (cardboard) from harm. Another, “virus removal and selective page deletion” shows a sniper team eliminating a virus (a walking cardboard menace) from afar. My favorite was the “competitive website sabotage” which depicts the team breaking into a competing websites’ office (hideout) and shooting their server in the…kernel as it were.

One issue I wrestled with was whether or not to include a framing device to show that these guys were the ones from the previous 404 video. The original wasn’t massively viral on a Gangnam level by any means, but a lot of people saw it and even Time Magazine got in on the action. I thought continuing the joke would be the most effective way to eventually go about getting press. Despite this, I ended up pulling out the bits that explained who these guys were, in favor of getting to the “action” quicker and presumably making it more immediately accessible. In retrospect, I wish I had left beginning where we explained more clearly what the video was about and why these internet mercenaries were offering out their services. 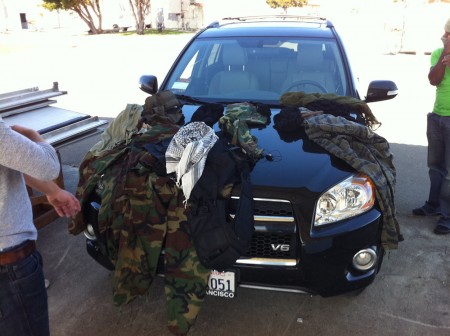 I think over my time at Firespotter, I’ve made something like 11 videos now. I’ve built up a pretty impressive array of gear at this point, and sourcing equipment for this project was easy to do. Everything was filmed on a 5DMKII with a 24-105mm lens. I had previously tried using my 50mm prime, but it was too shaky to be practical while running around like crazy. The kit lens worked great and provided the versatility required to shoot in an uninhibited fashion.

After using the C300 on my last shoot, I’ve since become a little spoiled when it comes to image quality. Looking back on this video, I do wish I had rented something a bit higher quality than my 5D. While professional looking, the 5D offers very little in the way of color grading latitude in post-production. It’s great for run and gun, but I think I’ll be renting up from now on if I can.

For the audio, most of it was done in post, but the onboard camera mic was generally good enough to capture the sounds of running and yelling. I had a mega-windproof blimp cage for a microphone that I used for one of two shots, but it was so difficult to hold as one person (in addition to the camera) that I pretty much gave up using it, despite how cool it looked.

Personale-wise, we had a crack team of six on this shoot. I was behind the camera, and my friends Phil Mills, Dan Clegg, Michael Chang, Ryan Lee and Tobie Lee were acting. Phil has been in just about every video I’ve ever made, and you may recognize him by now. We like to joke that all of our videos take place in the same universe — so while one minute Phil is shooting webpages and throwing grenades, the next he is rating things or running a restaurant. 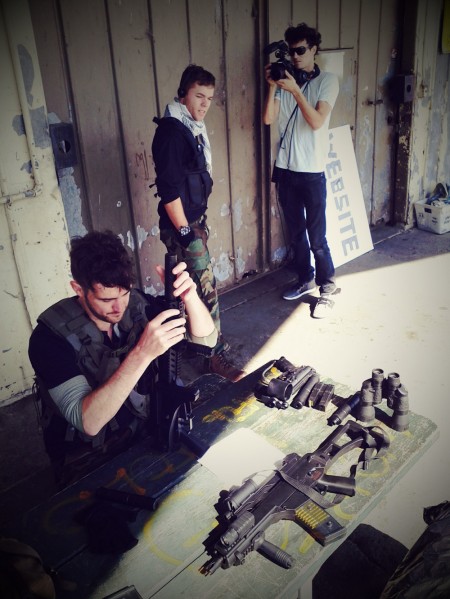 All of our props and costumes were from the last shoot. I had purchased a few extra airsoft guns since we had more people this time. I’ve had the best luck with Amazon and Evike when it comes to Airsoft. One of the things you need to worry about when filming with airsoft guns is police. We try our best to film in remote locations outside of San Francisco, but sometimes these derelict areas are also those that have a dedicated police patrol. During this shoot, I remember one of the guys rounding a corner, decked out in full camo with a M16 assault rifle, only to run right into the path of the local security patrol. Strangely, the patrol didn’t even bat an eye and kept right on driving. This was at once relieving and very concerning (because if that isn’t worth arresting us for..what is?). 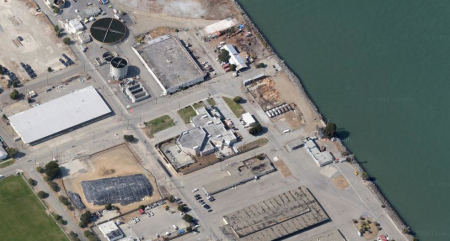 I’ve always loved Treasure Island, which sits between San Francisco and Oakland along the Bay Bridge. It’s a completely strange place. You’ve got incredible views of SF, giant airplane hangers full of who knows what, low-income housing, copious recreational fields, and completely abandoned half cities. It’s really the perfect place to film just about anything, largely because of the variety, but also because no one will bother you since most of the island is completely deserted. Sadly over the last year it’s getting a little cleaned up and the almost war-torn looking parts now are crisp and clean.

We filmed everything the same weekend we filmed the Jotly video. We did this and another video for Nosh (which we never released) on Saturday, and Jotly on Sunday. It was a pretty break-neck pace to film at and we were lucky to not have any major setbacks or speed bumps along the way. Once we arrived at the space, it was just a matter of planning out the 5-6 shots that we wanted to do for this video. If I remember, we only had about 2.5 hours to get all of the shots we wanted since some of the guys had to run to a matinee theater gig. 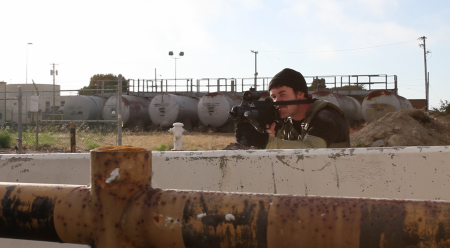 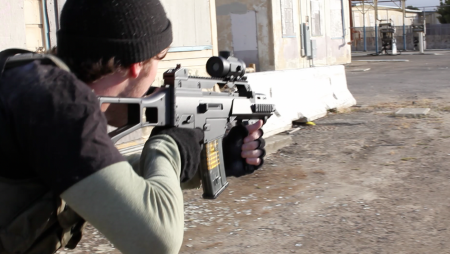 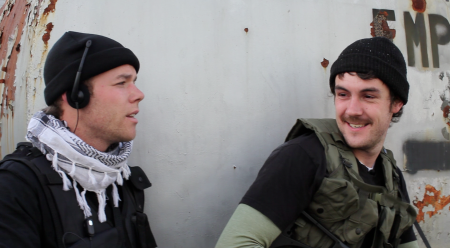 We essentially broke up the video into seven different action sequences, escalating in “coolness” and difficulty to film. The easiest was definitely the sniper scene, since all we really needed to film was two guys laying on a roof and Phil waddling around with the website cardboard. The most difficult was anything with timed “death” reactions, as in the first Firewall scene. Timing when someone goes down after being shot by a fake gun is really hard to do. We must have filmed that first scene close to 10 times before we got the timing looking appropriately realistic. A lot can be done with sound and muzzle flares etc, but the best way to sell it is to get the timing to be flawless.

Post Production
All of the post work was done in Final Cut 7 and After Effects 5.5. I edited this last November and I’ve since migrated to Adobe Premier. At the time though, I was flying around with Final Cut 7 and had no issues with this edit. After Effects 5.5 seems way faster to me than 6 (which I use now) as well, but that may be because I don’t have my settings properly aligned. I do know that there is a display bug with CS6 and the new Retina Macs which is really frustrating.

One of the hardest parts was cutting the music together. As some of you may recognize, the background music is pieces of The Rock soundtrack. The songs I was pulling from were obviously originally edited to fit the Rock, so getting the builds and exciting portions to line up with our visuals was really hard to do. In this case I was kind of scoring video to music, as opposed to the other way around. This took the longest by far of all of the post work. I picked the song because I felt like it gave the video that extra pow, and also to give a little hat tip to what I consider to be one of the best soundtracks of all time. 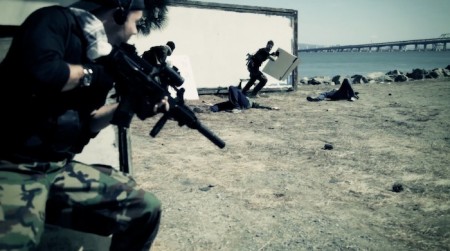 All of the effects were done in After Effects. Most were pretty straightforward muzzle flares and smoke, but there were two that were really time consuming and much more work than it may look like. The explosion took by far the longest since Phil runs across the blast area and I needed to rotoscope him out so I could animate the blast mark onto the ground. The second tough one was the sniper shot when all of the dust flies up. This took probably six different dust shots overlaid onto the original footage until I got it just right.

Epilogue
This was one of the most fun film projects I’ve done so far. Endlessly entertaining to construct such a weird universe and continue to build on the story lines. While it may be super confusing to first time viewers (not sure?), we figured it would be cool enough to stand on its own if need be, separate from its 404 parent. Hope you enjoy this slightly abbreviated process post. More to come!

Loved the sequel. I’m not a video guy but I enjoy the behind the scenes detail you give here. Keep it up!

really nice. I enjoyed a lot while watching the videos. Good job!

After looking at a handful of the blog posts on
your web page, I really appreciate your technique of blogging.

I added it to my bookmark website list and will be checking back soon.
Take a look at my web site as well and tell me your opinion.

thank you .. is nice posting