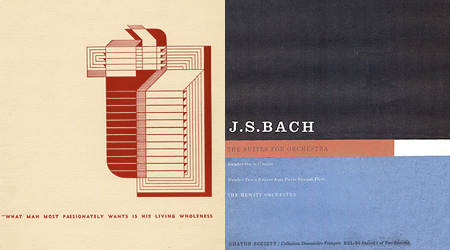 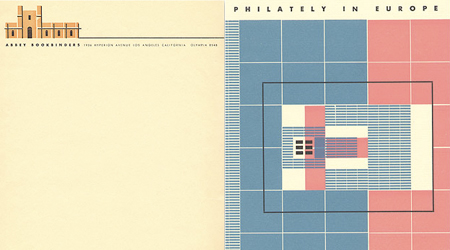 Alvin Lustig contributions to the design of books and book jackets, magazines, interiors, and textiles as well as his teachings would have made him a credible candidate for the AIGA Lifetime Achievement award when he was alive. By the time he died at the age of forty in 1955, he had already introduced principles of Modern art to graphic design that have had a long-term influence on contemporary practice. He was in the vanguard of a relatively small group who fervently, indeed religiously, believed in the curative power of good design when applied to all aspects of American life. He was a generalist, and yet in the specific media in which he excelled he established standards that are viable today. If one were to reconstruct, based on photographs, Lustig’s 1949 exhibition at The Composing Room Gallery in New York, the exhibits on view and the installation would be remarkably fresh, particularly in terms of the current trends in art-based imagery.

Update: I really can’t find larger images of this work so I put 2 in each image which doesn’t give them justice, please visit here.

Yep, Lustig was a genius.

Thanks for posting the link to the site. Serious eye-candy!

In the back of my mind I think that Alvin Lusting showed how to make something incredible with simple typography. He proved that direction and shape is most important in good design.

When you know direction and shape relations good design on the end of this way is only by-product (not casual).