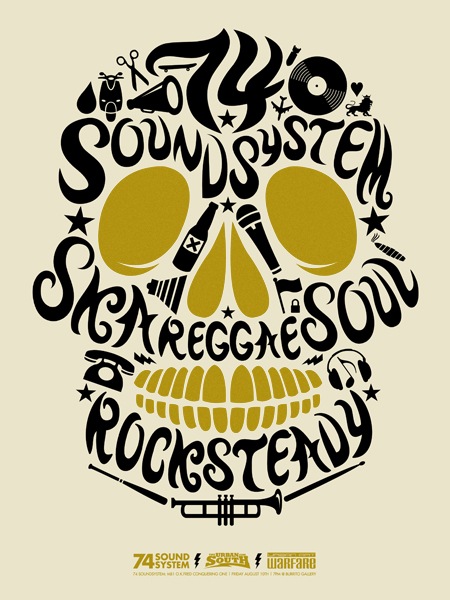 “Or just use ITC Avant Garde; you can’t go wrong with that one.”

Someones logo portfolio I know uses a lot of that typeface, can’t remember his name though.

Suprised you like that poster, must say, not my tastes.

daniel-
that’s the point, I also have a lot of deer antlers and rainbows in my portfolio…just poking fun at myself.

There were some more misunderstandings in the last couple of posts. Seems the irony is lost an some parts of the readership. In the future, you should include some [irony] tags. Or smilies (hey, maybe that’s the next trend…?).

skulls are fun, but i hear ya. i wouldn’t necessarily say it was a craze in just 06/07..it’s been going for years and probably seems more omnipresent thanks to the explosion of affliction style tshirts, not to mention josh at hydro74 is busier pumping skulls out than a 1 legged cat covering shit on a hardwood floor.

Not that it ever wasn’t “around” or used in some form or another, but it seems like really clean type without counters is becoming more and more of a widespread design trend. This kind of almost “controlled abstraction” of using type without counters or type that is right at the edge of being legible-but as clean type – not “grunge” or distorted type.

…But it looks cool.

Go to ffffound.com….many things are either
1.) Showcasing a large triangle
2.) Very metallic, Sega-esque, Tron-esque
3.) Both

…But it all looks cool

hey scott, maybe this could interest you!

I definitely think we’ll see more gradients and more outer-space before we see more straight to the point minimalism, although design overall is so diverse there are always pockets of similarities popping up.

Crap, I’m so misunderstood. I think I need to revise my written self.

But as far as trends go, I’d have to totally go with Scott Strickland’s submission, as it’s something I pretty much use in every design I do now days. The whole invisible grid / lines approach. Which I’ve mentioned before somewhere in this blog. Seems like “justify” is not just for type anymore.

While there are a few “logo trends” websites I’ve seen, one of them mentioned a particular one that I think has been taken totally a level beyond practicality. And that’s “underground” logos / typography.

Sorry, just read my comment above, Seems like “justify” is not just for type anymore., and I do realize that this in many cases has been design practice for ages and is nothing new, I am just acknowledging it’s somewhat taken further and practiced more often today.

#1. Paislies with lots and lots of swirly curlies like Si Scott on bad acid

Are you trying to tell me that my Affliction shirt and Ed Hardy trucker hat are no longer cool?

I need to hit the gym and rethink my life.

My guess is that trends from the early 60’s with a twist of early 90’s will be a trend. Whatever that might consist of. But I think the super tapered, tight, neon jeans sold at AA should be outlawed. Seriously.

Hey Scott – have you seen the show Mad Men? It’s quite amazing and I think it’d be right up your alley.

Jan-
agreed…I usually try to keep things somewhat straightforward, guess I lost some people when I lightened it up.

Glenford-
Josh is a perfect example of someone doing it right, his work is incredible. He could tattoo a skull on his face and it would still be cool.

haha yes, skulls continue to be the big double-edged-sword over at gigposters, even in ’08. while i can’t include myself in the gang of skull-makers, i think all of us are guilty of some sort of over-fascination at one point or another: antlers (+/- the deer head), octopi, owls, anatomical hearts, you name it. i think it really comes down to living in an age where ideas are so quickly shared and inspiration hits so many people at once. i think it’s good because it makes us all want to be even more original, even though that seems almost impossible these days!

I so understand that LA Skull thing, seriously they took it a little too far over here.

Damn it, I did get some of the irony! Don’t include me on that…

lost some people when I lightened it up.

…or there will be more skulls.

by the way scott, you should check out this article on AIGA’s site about how the skull trend will never die, was that a pun? :P

Ahoy Scott, Thanks for checking out my poster. I appreciate the compliments. It means a lot coming from you man, Im a big fan of yours as well. As far as the skull thing goes, I didn’t even realize I was about to put myself up in the middle of that skull trend. I did that illustration for the 74 Soundsystem in late ’07 one night while listening to them spin and eating burritos down here in the dirty dirty south. I pretty much used the icons that Fred has tattooed on his body and then hand lettered the type around the icons and inside the skull. Hand-done type is my fav. But yes right after I did this, I then noticed the elevated rise in skull stuff. Or maybe I didn’t notice it because living this close to Daytona and all the Bikers, I see skulls all the time. But this poster is one of my favs too, I think I sketched it that night, illustrated it the next day, and screen printed it the next week. quickest turn-a-round ever! I still have a couple left, If you want one hit me up with the email attached to this post and Ill send one over! And thanks again for the post, Levi “TRON” Ratliff

the pyramid trend seems to be dying out but still favoured in the grainy b&w space scenes still seen everywhere. my bet is that abstract 3d renders will make a huge come back and pixel fonts gets another breakthrough in web type. or not

triangles, and lots of electro colours. pink purple and turquoise on black. Yay for anything remotely daft punk themed!!