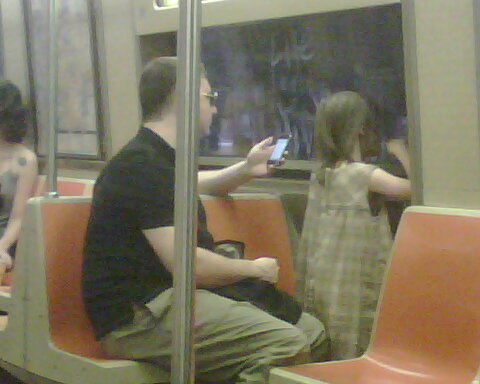 I wonder if he got the iphone free for being the douchey PC guy? :o

LOL, that’s just fantastic. But then again, he is the actor playing the PC guy for the “Apple commercials”. So it’s only to be expected that he owns apple products like the iPhone.

Rarely do I digg things… but I loved it. Dugg here: http://digg.com/apple/Mac_vs_PC_PC_using_iPhone

He’s actually a comic and a lover of Mac computers, so not toooo shocking out of character :)

John Hodgman!
He is indeed a Mac user, writer, and comic. I highly recommend his book of made up knowledge.

Same thing for me ;)

It’s funny to see that.

Great shot there. Surely this will leak out onto the various mac-sites out there, hehe.

not sure what da f u whant from him. commericals, actors, impersonations, fake plastic trees. shouldn’t we rise above that? every silly face today running around with iphone. so what? this is his life. ok you got that pic. be proud. have fun. such a yellow post. haven’t expected from iso50.

I think crackcode forgot his happy pills on the school bus this morning.

@ Crackcode: Cheer up princess, i don’t expect that kind of crap on this blog.

Nice. Check out this episode of This American Life, in which John Hodgman (the actor in question) talks about his experience being a sudden celebrity, and what’s it like to be him… walking into an Apple store:

anyone with good taste and a good head on their shoulders should check out his books.

umm.. he’s a comedian, pretty well known. apple pays him to be in those commercials, ya know?

@anon-
We know. An actor who is in Apple’s employ is likely to also be a user of their products. It’s just amusing to see the apparent (although not literal) contradiction when we are confronted with Apple’s personification of their own antithesis, himself using an Apple product.

But I suppose the humor is sort of lost once you have to explain it.

dont blame the guy, its a great device

What always amazes me about apple is that for a brand which sells such beautiful, simple looking design their advertising seems to be based on cheap shots at PCs. It’s not very clever and for a company which doesn’t need to compensate for its image it’s kind of uncalled for.

too bad PC is better…

PT Says: “Cheer up princess, i don’t expect that kind of crap on this blog.”

Relax. It was just my opinion. No body will be hurt there.

I am a PC guy and I own a iPod. I think there needs to be a realization that there is a middle ground. While I have absolute disdain for Apple’s OS in a computer but I think that it is great for small devices. I do not think that there is any problem with using a PC but then having an iPhone or an iPod. i think that it is smarter to use something that works the best for you without buying into the single-mindedness of saying one is better than the other. There are pros and cons to everything.

Some of these comments are way too serious. It is what it is, a funny and rare shot. Don’t think too hard on this one. There are plenty of other debatable posts on this site if you really want to argue about something.

its amazing how many people actually think we didn’t know he works for Apple, its kinda blowing my mind, all the “What’s the big deal?!?!!” kinda ruined it for me.

Well anyways it was fun, i hope John sold some books out of it

He’s great. He makes me want to buy more PC’s.

“But I suppose the humor is sort of lost once you have to explain it.”

I apologize. My comment was meant to be taken less literally and more as trolling sarcasm.

Ha ha… that’s a one of a kind come true reality ad.

I had to text my PC friend about this, him and I go at it and this really closes in our talks about the PC and Mac commercial Ads. We convert to Mac one way or another!

He works for Apple in Apple commercials. Just ’cause he plays the P.C. doesn’t mean he likes P.C.’s. Duh!!!! He doesn’t work for Microsoft! You’re so dumb you must be a Mac user!

Funny. Reading some responses I think that sarcasm and irony are so hard to understand to so many these days. Watch more House M.D

Maybe no one noticed, but he is in the Apple Commercials. Again, paid by Apple to be in Apple commercials. How is that not obvious, and why is it a shock that an actor for Apple is using the iPhone, an Apple product

Anonymous + Anonymous –
read the comments. we know. this wasn’t meant to be some sort of revelation…. it’s simply amusing.
here is a reprint of my response the last anons that came in here not getting it:

“@anon-
We know. An actor who is in Apple’s employ is likely to also be a user of their products. It’s just amusing to see the apparent (although not literal) contradiction when we are confronted with Apple’s personification of their own antithesis, himself using an Apple product.

But I suppose the humor is sort of lost once you have to explain it.”

Understanding the reason for the blog post EPIC FAIL

You are an idiot. Jakub clearly understands that he is an actor employed by Apple. It’s still kinda cool to see the “PC guy” with an iPhone. Calling someone a retard, in this case, only shows how incapable you are of interpreting/understanding irony, humor and the English language at large.

How did you not win a Pulitzer Prize for this photo?