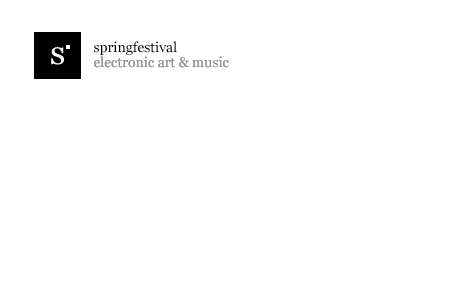 I’m headed to Graz, Austria where I’ll be playing a Tycho laptop set at Springfestival and doing an ISO50 talk at the related Springsessions conference. The talk is on Saturday, June 4th from 15:00 – 16:00 at Kunsthaus Graz and the Tycho set is early the next morning, Sunday, June 5th from 03:15 – 04:30 at P.P.C. All the details are at the Springfestival site.

Sorry for the late notice, but I wanted to be absolutely sure I was going to make it out there. The Tycho album is now in the very last stages of mixing/mastering so I wasn’t sure if I was going to be able to make the trip and the album delivery deadline. To make it all work I decided to hack together a portable computer setup from my main tower PC so I could finish up some remaining songs before I return when the mastering will begin. After some light dremel work I had all the components fitting inside a small aluminum case I found laying around (pictured below, the PSU is separate. And yeah, I’m planning on spending a fair amount of time at airport security). You might ask why I don’t just port the project over to a laptop; the reason is that the projects are simply too large to run my current notebook (early Macbook Pro Unibody). In order to run the big projects (96+ tracks with 250+ VST instances) I had to add three SSD drives in a RAID 0 (in other words, three fast storage devices chained together to act as one very fast storage device) configuration to my existing Intel i7 rig.

I had already been bringing my tower to Count’s (aka Mikael Eldridge, the engineer who I’m working together with to mix the album) studio to mix. We decided to mix several of the songs directly from Reaper as opposed to porting them to Pro Tools like usual so I had to bring my machine in. This already had me thinking about slimming down the rig to make it more portable. It’s really been a freeing experience being able to move around with my main computer; I’m so used to bouncing down projects, flattening layers, and generally compromising things to get them small enough to run on my Macbook Pro when I travel so the idea of having all the power of my studio computer with me anywhere is pretty exciting.

Of course, this is just a temporary stop-gap measure to get through a scheduling conflict. I think the next step is to get a powerhouse laptop machine with Lightpeak/Thunderbolt so I can get a PCI SSD RAID setup or some storage device with equivalent bandwidth. I was thinking about the Dell Precision (I’m PC only when it comes music and design, although I have several Macs and love them, just not for creating on) or some “gaming” laptop. It really doesn’t need to be that small, just more portable than a tower as I wouldn’t be moving it that often. Any suggestions? My wish list would be Intel i7 or better, 16GB ram, and at least 250GB of SSD storage with a bandwidth of 500MB/s up/down. Probably a tall order, but I’m hoping something on that level will be available soon. 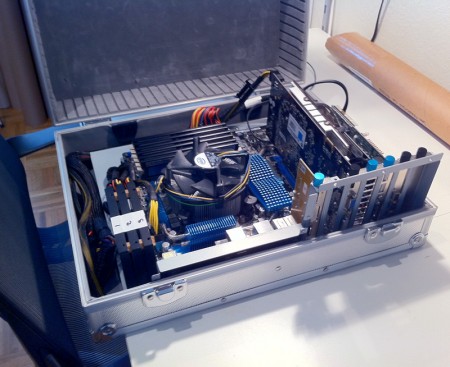 Hope to see some of you in Graz.

Good luck through the airport!

Excited for your releases. Enjoy the show!

I like the update. Thanks for the insight into the recording process.

Can’t wait for the new album.

I just got an alienware PC. It’s super solid. 24 gigs of ram. I use it for 3D and design work. I would look at there laptops. Love the playlist’s and the graphics. Have fun in Austria! – Thanks

I just got an alienware PC. It’s super solid. 24 gigs of ram! I use it for 3D and design work. I would look at their laptops. Love your playlist’s and graphics. Have fun in Austria! – Thanks

As you mentioned Dell Precision is one option. The others are HP Elitebook workstations specifically 8740w or if you want something cheaper look into Clevo laptops. They are usually the most powerful mainstream notebooks. They are marketed as Maingear in the states. Here’s a link http://www.maingear.com/custom/computers/notebooks/17.php

As you mentioned Dell Precision is one option. The others are HP Elitebook workstations specifically 8740w or if you want something cheaper look into Clevo laptops. They are usually the most powerful mainstream notebooks. They are marketed as Maingear in the states. Here’s a link http://www.maingear.com/custom/computers/notebooks/17.php

Sweet looking rig btw. Maybe you should just look into mounting a monitor from the inside :D All you would need then is a keyboard and a mouse.

I wish I could be there. I’m sure it will be a great show.

Ahhhh! I’m from Austria, however, I’ve got my finals/A-levels at the 9th of June. I would have liked to see your talk, as you’re one of those artists which are the reason why I want to study graphic design. Hope there will be another opportunity to see you in the upcoming years!

Is that stock cooler holding your i7 over?

May I suggest that one thing you may want to do is mod whatever computer you may get by removing the optical drive and then fit 1-2 SSD drives in its place, then purchase a case for your orphaned optical drive, or buy a cheap USB model. When I was looking at computers to buy (eventually got the early MBP with a SSD and upgraded GPU) I saw another computer with the setup I described above.

I think Thunderbolt is going to be amazing, with a number of hard drive options within the next 6 months. I love whatever LaCie puts out, and have never had a drive of theirs go down.

I would suggest either the newest MacBookPros (DualBoot of course) or the new gaming rigs from Alienware. Both pricey I know (look, with my money I bought used) but they both seem to have power, and despite being a Mac guy, that Alienware look just is darn attractive.

I’d recommend trying a Lenovo Thinkpad W520 for your mobile needs. It’s quite the beast, and should easily meet your requirements. If you find that you’d be able to get by with slightly lower specs–8GB max RAM and an i5–then a T420s would also make for a great (and cheaper) purchase. You may have to add some aftermarket storage, though, as I think most Thinkpads only ship with up to 160GB for an SSD. Lenovo is really great with custom orders, so you may be able to get a larger drive if you contact a representative.

I don’t have any suggestions regarding a new laptop (I’m sure you already have a plan in mind), but I would like to compliment you on your make-shift workstation…. very impressed.

Can’t wait for the new album dude… You’re one of my favourite artists of the past 10 years – both musically and graphically.

All the best,
O

Hey, it’s nice to see you know a decent amount about computers. :)

You might want to check out Sager, you can go through and customize laptops with them. Not sure if they have the specs you’re looking for but it’s worth checking out, I’ve heard good things.
http://www.sagernotebook.com/

Asus is also a reliable company, I typically buy everything hardware related I can from them and have never had an issue.

Can’t wait for the new album, is it still planned for after summer? :(

The site I was thinking of (but it didn’t come to mind at the time) was actually http://www.falcon-nw.com/laptops

The previous one I linked to is worth checking out as well though.

Yeah Sager and Maingeard are basically the same laptops based on Clevo. Their scheme is a mess, but essentially it’s few models with different models and different logos in different parts of the world.

Nice to see someone choosing computing hardware based on functionality/practicality rather than “cool looks” etc. Macs are nice in some ways but they’re definitely not worth what Steve’s asking for them!

damn! won’t make it to graz tomorrow! hope to get a chance to meet you the next time you head to europe!

have fun, a good flight and lot of good contacts!

I’ve been slowly catching up on my google reader feed since i like to disappear of the grid on minnesota on weekends.

I came across this:
http://www.maximumpc.com/article/news/nextcomputing_launches_first_portable_workstation_integrated_battery

the funny thing is i’ve been working on a similar idea since the day this was posted without ever coming across it till now. hopefully mine will be much more thought out though… and open for any build (ATX)