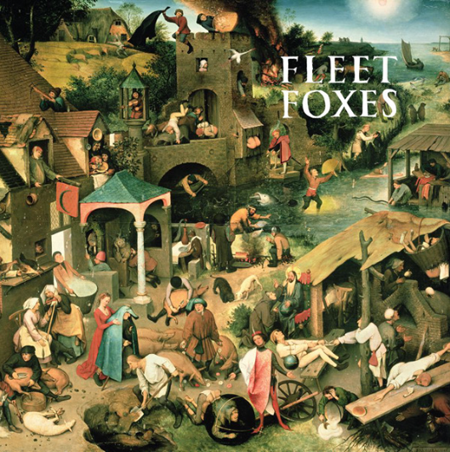 Hello Scott, I sincerely believe your readers and you share similar taste in music and art. May I suggest you post future events that are worthy to attend and visit? – Thanks Scott.

Fleet Foxes are sooo good. They remind of Crosby, Stills, Nash & Young. Have you heard Fleet Foxes’ “Blue Ridge Mountain” and “Mykonos?” Oh so good! It seems like there’s less and less people making music like this these days. I wish there was more.

The cover is a painting by Pieter Bruegel also known as Pieter The Elder.
the painting itself is called “The Blue Cloak” (or “Flemish Proverbs”), it’s a depiction of aphorisms about generally foolish human behavior, from tossing feathers, to biting iron, to taking a dump out a window…

Ah – thanks for the correction Joris. Looked very much like Hieronymus to me, but then again I am no art historian. Found some more info on this painting: http://en.wikipedia.org/wiki/Netherlandish_Proverbs

wow – started playing “Balearic Incarnation” and then went to get brekky. Came back to hear the most stunning sounds eminating from my speakers!! (just after the 7 minute mark)

on the album cover – the second woman under the title text… is she holding a snake?? haha cool cover – keeps you interested