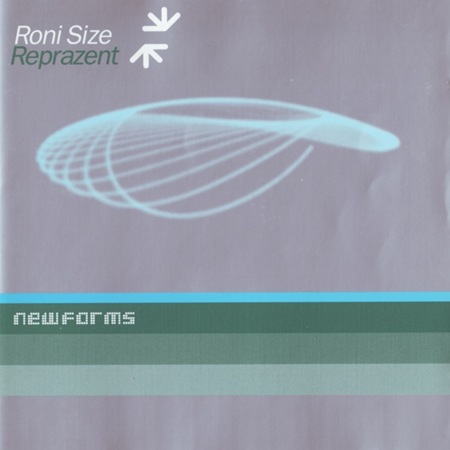 My introduction to electronic music came via the UK drum n bass movement of the mid to late 1990’s. Logical Progression was and is one of my top electronic albums of all time. I was also a big fan of the Bristol scene and labels like Full Cycle and Dope Dragon so when Roni Size & Reprazent dropped New Forms in 1997 I was hooked. This album won Britain’s coveted Mercury Prize (and mind you, this was the same year OK Computer and Fat of The Land were released) and sort of signaled the peak of Drum n Bass as a whole. In my opinion the genre pretty much backslid from that point forward until it completely devolved into some sort of dance floor-fodder, cookie cutter noise-fest; but that’s beside the point. New Forms stands as a classic album without qualification, it can sit beside great records from more traditional genres and still hold it’s own.

Used to listen to this when drivin around all the time when I lived in Uk…actually come to think of it, its still in the car now! In original dubbed tape form of course :)

Hell yes, i completely agree with that. It’s sad but i haven’t found a D&B album I’ve liked as much as new forms. It was definitely fresh when it first came out.

Hospital records offshoot ‘Med School’ is really the only label pushing creativity and originality within the genre.

There have been other albums i feel that have been good but nothing like this one… I think this album was big for a lot of people….

I’m glad you posted this. Newforms was the first album I ever purchased on my own, introducing me to the entire culture of electronic music and influencing a good portion of what I’ve listened to up to this day. It’s funny because I purchased it solely on the album cover, knowing nothing about who Roni Size was. I don’t even think I knew what it sounded like. So this album marks the beginning of both my love for electronic music and album package design. So it’s pretty important to me…

It always saddens me when people claim that D&B has died creatively. While it’s true that there was a period of (inevitable) decline, to say that it is now nothing more than cookie-cutter noise-fest is pretty far of the mark. I would urge you listen to the new album from D-Bridge, and tracks from people like Survival and Instra:mental before you write off the genre.

I echo those pointing to hospital records.

London Elektricity’s ‘Billion Dollar Gravy’ is definitely worth a listen and even more so impressive because they toured the album playing the tracks live.

YES!! Scott, I’m so happy you posted this!

I’m listening to Progression Sessions 2 (Blame & DRS, not LTJ & MC Conrad interestingly) right now as a matter of fact– LTJ Bukem and MC Conrad have produced some of the most poignant and timeless Drum n Bass I’ve ever heard…I’m sure I’ll be listening to this stuff on my deathbed. I find the sounds of atmospheric jungle (as defined by ishkur) to be perfect for doing design work, and the sound has influenced my own style, which I am still discovering and sharpening.

I disagree with you on it backsliding however, I think it kind of split off into different areas and not much has been made just yet to advance the genre much further since that split…I see DnB as a sound for the youth 50 yrs from now, way ahead of its time. But if you look at what happened to DnB between the mid 90’s up until around late 2001, and then what’s come out since then, there was definately a bubble of creativity that burst into a variety of sounds– a spectrum from dark and growling to ethereal and radiant. I think DnB was discovered to be much more diverse than had been thought before…

I guess it varies by artist, the more I think about it…it’s definately an arguable claim that it’s backslided in recent years. I’d be interested to hear any specific examples you can think of.

I think people like Dieselboy’s material has gone downhill since the 6ixth Session, and I hear what you’re saying about the dance floor-fodder, cookie cutter noise-fest in that case. But then I think others, like Klute and 4hero have continued to move things forward, even tho 4hero kind of went off in a completely different direction with Play With the Changes.

I will always hold a special place in my heart for that peak period tho.

Logical Progressions is the same album that hooked me into electronic music and later reigned me back after a few years of absence :)

Roni Size and Goldie were all I listened to in 1996. Check out some old Photek and U-Ziq. Great stuff

Ok, now I know I am hooked on all that Scott H makes. Not only some amazing amazing graphical ability, but he also makes electronic music. And now I find out he listens to some crazy good-ol-days dnb like this. what next. heh. :)

New Forms was also my first introduction to DNB, I’ve been a fan of Roni Size and Full Cycle ever since.

This album dropped in a pivotal moment in my life and a transitional time for music altogether. I agree, it remains an important album still today.

absolutely!!
but not to forget this amazin roni size project called BREAKBEAT ERA. know this? – in my opinion it’s a perfect combination..

“Alex / HeadUp” summed up everything I wanted to say. Well put Alex.

I would like to add a few labels/ links for people to check out. They still drop quality tracks on a monthly basis. You just have to know where to look for em’. Most importantly though, they still drop em on WAX.

Dnb will never die in my eyes.

There are amazing new productions and mixes still going on and the genre is actually making a comeback in popularity, especially the “liquid sound”. The same sound that was actually very unpopular during the genre’s hayday. I still have the decks set up and still rock my record collection from 99 – 04.