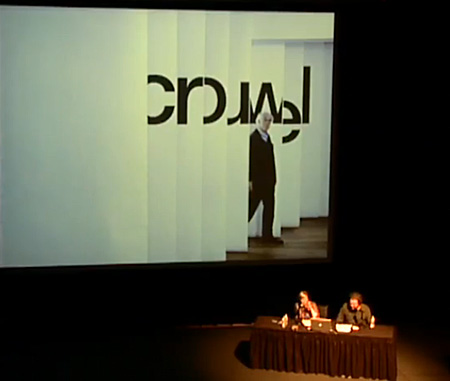 Note: Skip to around 5 minutes in to bypass the outdated AIGA news

In addition to the Experimental Jetset Interview that Alex did a while back, this video should help reveal some more information about Experimental Jetset. The first time I watched the video I felt more of a connection to their work simply because I could see and hear their personality. Why?

More than once I’ve been informed of a new artists or designers but haven’t connected with them because I can’t see them talk about their work. Take David Carson as an example. During my first year at the Art Institute I heard his name once a day, five days a week and for the life of me, couldn’t see the value in his design. Now hold on here for a second, I know I’m not the only one (not trying to start a David Carson war here). Regardless my opinion has since changed. But not because I could finally comprehend his intentions. It was because when I watched a video of him speaking I started to see where he was coming from. It was almost as if seeing and hearing him talk let me see into his creative prism. Perhaps by his humor or perhaps because I could simply see him. Either way it helped me establish trust in what he was doing as a designer, or artist, whatever you might consider him to be.

Experimental Jetset didn’t need that trust or comprehension on my end. It was already there because I enjoyed their works and established an immediate connection to them. However, I still really enjoyed seeing Marieke and Danny share insight on their works. Part of it was realizing that these people that I look up to are human and part of it was that hearing those little insights into their creative process is very valuable and inspiring.

Agreed. There are still designers that I follow because I heard or saw them present.

what really inspired it is the creativity

I was at this lecture. Very inspirational. I also had the pleasure of taking part in a workshop they put on at MCAD while they were in town. A summary of that workshop can be seen here: http://geotypografika.com/2009/03/27/grd_5010-experimental-jetset/

But isn’t this in many ways the worst lecture you’ve every seen? I also might like the EJ’s work, but this fumbling with words doesn’t really appeal to me…

I’m quite interested in what people want to see and hear when they go and see their design heroes. Indeed, a slideshow of their work doesn’t suffice; that’s what you already know. Behind the scenes is obvious, but how far behind? Can it take the magic away?

Tiemen — we need our heroes to be humanized so we can move on to other and better heroes (until they too are humanized). Then we just respect them and admire them — which is the role they should have had in our hearts to begin with.

I always enjoyed how EJ’s work was so stripped down that you could see the designer’s mind behind each project. They are design nerds for other design nerds to look up to.

Thought you might enjoy a couple photos I took of Mr. Wim Crouwel at his home in Amsterdam this spring. http://www.flickr.com/photos/travispurrington/5078942351/in/photostream/

Thats a nice place to have a presentation.

What a pleasure that must have been to be in the presence of of Wim Crouwel. Thanks for sharing these photos.