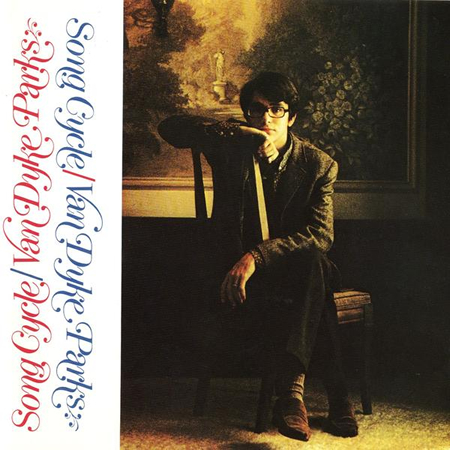 I’ve heard the intro to All Golden sampled in a song but can’t name it. I now have to know.

Van Dyke Parks did the arrangements for Joanna Newson’s Ys, and therefore together they created what is to me one of the greatest album of, if not all time, the decade for sure. I’ve never been curious enough to check out his own work, though. Thanks for article, I have a feeling I’ll get his recordings soon ;)

@NEOkeitaro – You can really hear him shine through on her album – such a great combination. You’ll *thoroughly* enjoy the rest of Song Cycle – or your money back.

@Beamer – Definitely, and the mixing is spot on. Some parts never fail to make me shiver, even after dozens of listens… I’ll definitely check out his albums, thanks a lot :)

Here’s hoping the rest are better than ‘Palm Desert’. File this under ‘gay showtunes’.

Not feeling this at all, sorry to say.

One of the most colorful records to emerge from 1968, hands-down. This record blew my mind when I first heard it. At the time, I’d only known his name for his enormous contribution to Brian Wilson’s ‘SMiLE’ sessions, and later learned that he was a master arranger, composer, and session musician (that’s him on Tim Buckley’s debut, and he’s behind the keys for ‘5D,’ the opener on the glorious ‘Fifth Dimension’ album from The Byrds). He was mighty particular about the sounds on this record, too. Powerfully diverse stuff; he commanded a boatload of session folks — check the names in the liner notes. I’d also recommend the ‘Look! Listen! Vibrate! Smile!’ book about the SMiLE album for a great collection of press clips and background on Parks’ early work. Solid post, man.

@donato0 I think a sample of that track ended up somewheres on Madlib’s Movie Scenes: Vol. 1-2, if I remember correctly.

DominicU, you are absolutely correct! It’s track 10, “Left On Silverlake (Ride). Thanks for the fine tuning, I knew I heard it. And once you said Madlib I knew it had to be him.

nice to see a bit of Van Dyke Parks resurgence. Discover America is one of my all time favorites (@NEOkeitaro, as is Ys). He also just played as part of the mindblowingly amazing line-up for the Primavera Sound festival in Barcelona —> http://blog.wfmu.org/freeform/2010/06/van-dyke-parks-wholesome-charm-at-primavera-sound-2010.html

This album sucks balls. What the heck is wrong with you?

Ahhhhh BEAMER!!! This album…really? Shame on you.

(BTW, you dropped your pocket.)

Perfect album? The whole reason I bought this album was because it was always at or near the top of ‘all-time worst albums’ lists. (I gotts admit that I kinda liked it though, but I AM weird like that.)