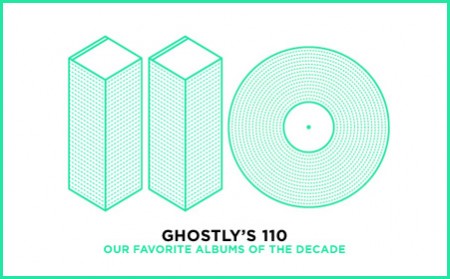 Ghostly’s 110 is a rundown of our favorite albums of the decade. In making the list, we wanted to share the albums we’ve loved over the last 10 years, so fans can compare notes and perhaps make a few new discoveries in the process. The impetus for this list was our belief that a record label is more than just a music distributor–it’s a perspective all its own.

To start, we asked the Ghostly staff for their top 100 albums (no EPs, reissues, or various-artist compilations) from the decade.  While there was a stunning consistency within the top 20, there were hundreds of releases that had only one vote.  From there, we had to make some tough decisions. Tears were shed and punches thrown, but we ended up with a document that wears the Ghostly seal of approval with pride.

We also wanted to keep our list pure and nepotism-free, so we left off all Ghostly/Spectral albums, as well as any artist who has over a few songs on the label. Of course, this meant we couldn’t include eternal classics like Solvent’s Solvent City, Rafael Anton Irissarir’s Daydreaming, and of course, Tycho’s Past Is Prologue.

In short, it’s been a wild decade. We’ve all seen and experienced so much, and while no one knows what the future holds, we do know that good music will always keep coming.  Ghostly’s 110 is also a tribute to the labels and record stores that have inspired us, and the ones that we’ve lost in the last decade.

There are more than a few albums that could have easily made the list, and I wanted to recognize them below.

The Sea and Cake’s Oui (Thrill Jockey, 2000) was an easy contender for top albums of the decade that just didn’t get the votes, perhaps overlooked because of the bands consistent understated awesomeness. A mesmerizing album of subtle grace.

Dungen was a band that seemed to come out of nowhere with Ta Det Lungt (Kemado, 2005), capturing a piece of the global mindshare with this album of puzzlingly perfect rock.

I know E. Lipp is a fixture at ISO50, but Tacoma Mockingbird (Hefty, 2006) is the record that put him on the map. Beautifully conceived synth lines atop classic breaks.

Like a bolt from the (aqueous) blue, Portishead returned with Third (Island, 2008) having lost no steam and having found their new voice–while retaining the haunted, dusty majesty of their early work.

zx got you Sam, lets just take the post down

Good call ZX, I was going with the popular view of the decade (counted on your fingers).

I’d love to hear from any ISO’ers what albums we missed in our list, as I know we didn’t hear all the good ones.

zx, although this shouldn’t be an issue, I will point you to this link to relieve you of your ignorance

Sea and Cake’s Oui is better than almost every record on their list!

Jared: I’m more convinced by the historians than Joshua Zumbrun, whoever he are (even if he writes for Forbes). I got his point of view, but he just tries to simplify all the dates stuff for a general person to get it more easily. That’s not the way.

Oh, and sure – decade is just a world for ‘ten years’, but I think that by selecting ‘something of the decade’ we mean the decade in THE meaning.

Fine and tasty. When will you (or Scott) put the playliste #7 on line ?

All were fantastic…except for the Portishead track. It was too abrasive for my tastes. The constant tone in the background really bugged me. To each their own though.

Well, this post is about favorite albums from the previous 10 yrs, so… I guess I will follow the same rules (Ø Ghostly/Spectral; LP’s only). These are in addition to ones already mentioned on Ghostly.com:

I’m sure I missed many (as Ghostly did as well), but these are top-notch in my humble opinion.